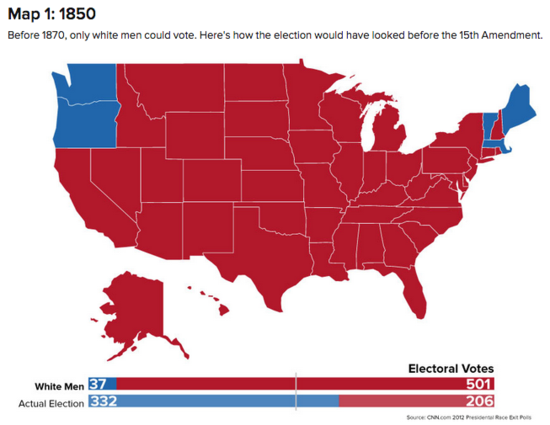 To be fair to Romney he did get a majority of votes of white women also (by 14%) but overall lost the female vote by 11%. The margins for each gender and race demographic were:

It will be difficult for a Republican to win any of the last four demographics 0 but they need to at least be a bit more competitive.

The economy may have been showing feeble signs of life in the last couple of months, but it is hardly robust. No president had won reelection with unemployment above 7 percent since Franklin Roosevelt; it is now 7.9 percent. Three-quarters of voters thought the economy’s performance is poor or just fair. Throw in a health-care law that voters opposed 49 percent to 43, turmoil overseas, and assorted scandals, and an observer from Mars would have said that there was no way Romney could lose.

Yet Romney not only lost, he lost decisively.

There will be temptations to blame a poor candidate or a campaign that squandered several opportunities. And it is true that Romney was a flawed candidate, and his campaign’s strategy proved imperfect, too. He failed to press his advantage after the first debate, and seemed to switch positions at a whim.

But the Republican party’s problems go much deeper.

I don’t think Romney is why they lost. I think its is a wider issue also.

Much of the media will jump to the conclusion that the Tea Party is to blame for Republican losses. Yet tea-party candidates actually did well overall. In the House, fewer than five members of the Tea Party Caucus lost reelection.

On the Senate side, tea-party favorite Richard Mourdock went down to defeat in Indiana, a state Romney was carrying by a big margin. In Missouri, Todd Akin threw away one of the most winnable Senate seats in the country. But Akin, contrary to media wisdom, was never a tea-party candidate. During the primaries, most tea-party groups backed one of his opponents. Akin won because he had strong support from social conservatives while the other candidates split the more economically conservative vote. Meanwhile, Mourdock’s self-inflicted wounds were not a result of his tea-party background.

Asked if government does too much or should do more, exit polls showed that voters said “too much” by a margin of 51 percent to 44. Voters certainly seem receptive to a small-government message, at least in some respects, even when what appears to be somewhat more liberal and Democratic electorate is being polled.

So what went wrong? First, demographics. This election is testimony to the fact that Republicans cannot survive by being the party of old white men. The white share of the electorate has steadily declined for the last several elections, and this time around, whites accounted for just 72 percent of the vote.

Other demographic changes worked against Republicans as well. For example, single women now outnumber married women in the electorate, and they favored Obama by roughly 30 points. The gender gap overall was bigger this year than in 2008.

This is a huge challenge for the Republicans. In general terms, abortion is not as significant issue for married women, than single women. Single women see the Republican stance on abortion as akin to “Don’t have sex, and if you do then you must dedicate the next 19 years to raising a child should you become pregnant”.

Republicans must face up to the fact that their hard-line stance on immigration is disqualifying their candidates with Hispanics. Whereas George W. Bush once carried 44 percent of the Latino vote, Mitt Romney couldn’t crack 35 percent. To see why Romney appears to have essentially tied in Florida, for example, just look to Obama’s margin among non-Cuban Hispanics. Similarly, the growing Hispanic vote clearly cost Romney both Nevada and Colorado.

Again, I agree. No Government is going to throw out every illegal immigrant in the US. They do need stronger borders, but they also need a path to legal residency for those who are already in the US and are gainfully employed.

President Obama is likely to push immigration reform in his second term, and Republicans are going to have to find how to address the issue in a way that will not cost them the Latino vote for generations to come.

Hopefully. Obama failed to do anything in his first two years when he had a Democratic majority in both houses.

Second, social issues continue to hurt Republicans with women, young voters, and suburbanites. The problem is not just a matter of their stance on the issues, but their tone. It’s not just that Republicans oppose abortion or gay marriage, but that they often sound intolerant and self-righteous in doing so. Romney himself may not have put much emphasis on social issues, but the Republican brand was too easily associated with the words of Todd Akin.

Absolutely. There are ways you can express a view against abortion and gay marriage without offending people.