A bill to give people Monday off when Anzac and Waitangi Days fall on a weekend is a step closer to being passed.

The bill was expected to have its third and final reading on April 17 but the first holiday to coincide with the weekend won’t be until 2015.

For those wondering about future dates which will be impacted by this bill, I’ve done a table 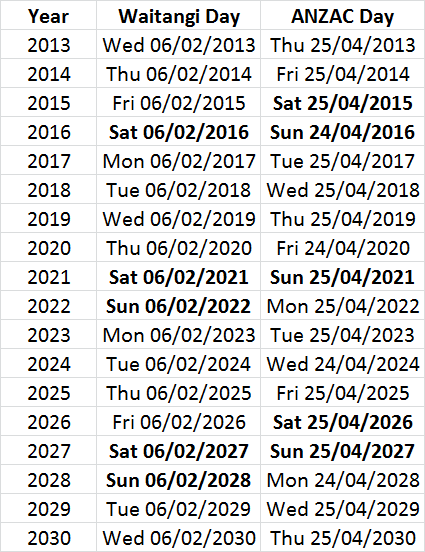 The change I’d like to see now happen is we swap Queen’s Birthday for a New Zealand Day.

It is rare for a members’ bill to pass against the opposition of a Government, but it is good it can happen.

I note that my support for the bill and calculations on the minimal costs to employers were quoted by Grant Robertson and Iain Lees-Galloway in the debate last night. Not sure quoting me makes National MPs more or less likely to vote for it 🙂

I think consistency in Mondayising is a good thing, and if we have legislation for 11 public holidays a year, then it should be 11. We can debate whether 11 is too few or too many, but I think consistent Mondayisation is entirely sensible.

Would anyone advocate that if Christmas Day and Boxing Day falls on a weekend, there be no long weekend?

When debating public holidays, we should look at them in combination with annual leave. In total Kiwis get 31 days a year off on pay – four weeks annual leave (or they can cash one in) and 11 days public holidays. The difference between the two is people take annual leave at all different times, while public holidays are days when many (but not all) employers are closed.