Sir Keith Holyoake is New Zealand’s third longest serving Prime Minister. His statue is in Molesworth Street outside the building that used to house the States Services Commission. 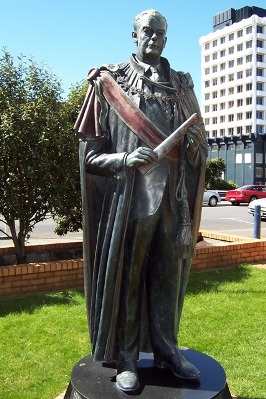 As our 3rd longest serving Prime Minister, his statue should have been in Parliament Grounds along with Seddon and Ballance. Ballance was Premier for only two years!

The Labour Government in 1987 refused to allow Holyoake’s statue to go in Parliament, despite the wishes of the Holyoake family for it to be placed there. They placed it outside the SSC Building on the basis he had something to do with establishing them. A petty and pathetic decision I thought.

Anyway the building it is outside no longer houses the SSC. It is now Rugby House, the home of the NZRFU. It is bizarre to have Sir Keith outside the building of a private sporting body.

Anyway there is a small problem with reclaiming Sir Keith for Parliament. His statue was accidentally sold as part of the building.

The Government could buy it back, but maybe there is another solution.

Why not commission an iconic rugby statue or sculpture and do a swap? Place the rugby sculpture outside Rugby House and move Sir Keith to Parliament?