People ask me where are you living these days. Well, due to Heidi Klum not returning any of my many emails, txt’s or skype calls I’ve ended up with David Farrar as my flatmate. Shoot for the ground and you can’t miss I say.

Now, evidently he has a little known/read blog which I think is called “Kiwioil Meathead Captured Cooked”…I’m not too sure as I tend to engross myself in the IRD’s Blog titled “How much do I owe in Child-support to my numerous ex -wives”.

Anyway, I digress. So David’s my flatmate, and flatting with him is like living with a born again Richard Simmons. I’ve known him for well over 20 years and seeing him turn into a Health food zealot often borders on Monty Python-esque humour.

In fact, a typical evening’s conversation from David goes along the lines of….”Hey did you know I ran 673 kms at the Gym, came home, devoured a brussel-sprout and am thinking now I’m thin and skinny I’ll get married”.

Too funny right! I know, but pretend I’m laughing at Southpark which is the only television programme we watch…..he’s none the wiser…… poor man.

So, last Friday night he actually surprised me, I was expecting the normal… “G’day, today I ran 49 billion kms, ate a single uncooked grain of brown rice and am thinking of walking to Antarctica this weekend”…Instead he said “Come look at this I need you to write up a Car Report for me…..BMW have given me this white car and you know a bit about cars, so take it for a drive and write the report.

I said…. “Dave, I’m a good looking guy, I’m single and it’s Friday night…I have options”……He pointed out that I’m an Orang-utan with many ex-wives and that a white BMW was about as lucky as I was going to get on any night.

So, like the cool young hip things we are, we jumped into the latest BMW 320i and went Friday night cruising in Wellington. 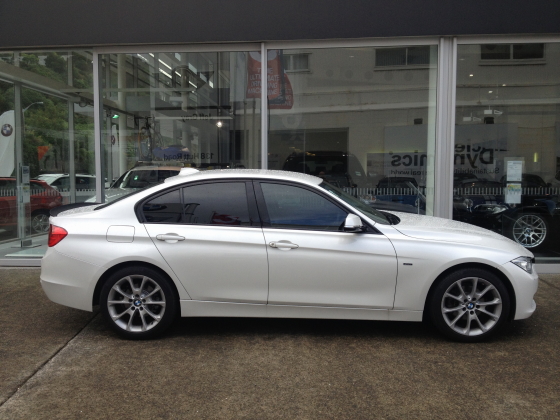 Dave’s driving, and it seems an opportune time to begin the review.

Ok, so this is where we review of the bad stuff first. Like any good motoring journalist you have to put the ‘boot’ (cleverly hidden car pun right there) in somewhere. And as we are both nowhere near ever becoming motoring journalists I think it’s best to get the negatives out the way first.

The first major drawback of the car is that it’s a 320i. And this was compounded by the fact that it had the 320i badge on the back. Sure, it’s true, Dave and I have no shame, but seriously Mr BMW person, you could have saved our dignity and given us something with a big donkey in it. The one saving grace is that it has tinted windows, so we didn’t lose our cool.

Then there is the English lady who was on the Sat Nav. It was like listening to my English mother…she kept mispronouncing Wellington Place Names. So that was worth a laugh. However I don’t blame BMW about that, because after all this really is a Remuera car, and I’m sure the English voice settings are perfect in its natural environment……probably something like…..“Benson Road Cafe, 20 metres, and you have reached your gorgeous trophy wife”. I sooooo miss Auckland.

The next major drawback was that the stereo immediately picked up David’s iPhone song list……. Turn on the car and being accosted by Sonny and Cher’s – You got me Babe was a low moment. BMW, there are apps to jam both Sonny and Cher and the Carpenters.

So Dave’s driving the car right, and he’s trying to sound like he knows what he is talking about.

This is a verbatim record of his observations about BMW’s most popular car; “Fuck, it’s got bright indicators”. “The Brakes work”. “It turns tight“. “It goes fast”. “I like this car”.

So, those were the low points of the drive.

Now for the good bits of the 320i. We know Mr BMW is hanging on our every word so as to use one of our quotes in their next NBR advert.

I take over the driving from David. NB: I will declare my interest in BMW’s…I love them, having owned three in the past. 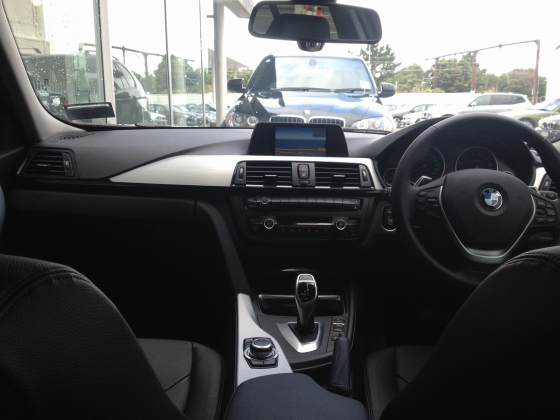 This 320i really is a great car to drive. I it just feels at home on the road and nothing phased it at all. We didn’t even bother looking at the instruction manual – mainly because we know that Whale’s a big follower of this blog and would take our man cards off us if we even knew where the instruction manual was.

On the Sunday, we headed off to Petone foreshore to kayak over to Soames Island. However, we get there and it’s cutting up rough…southerly, rain, freezing…a typical Wellington summer day…and we were trash talking how we will make it to the Island.

In between the trash talking I was playing with the entertainment system, audio and sat nav etc. It is easy to use and very intuitive! We even changed the clock settings due to Daylight savings giving me an extra hour in bed. So, all the crap that Jeremy Clarkson goes on about not being able to work BMW’s thingamabob icontrol button system, seems to be nothing more than that of a man clinging tightly to his iPhone 4s and not embracing new technology.

Ok, so it’s blowing a Southerly, the trash talk is getting up there, then Mr Kayak man turns up.

We get out of the snug Beeeemer and are ready to go!

“Ah…sorry, it’s too rough for you to go out there”. Said the Kayak delivery man. Farrar sold out and was back in the car ready to go home. I pushed a little harder and explored the options. The response from the kayak man was soul destroying and a salutatory lesson in listening to the experts…..”Listen, I would go out there but I’m a pro, you aren’t and I kinda like my kayaks”.

So, back into the car and off to Days Bay in Eastbourne in atrocious weather. 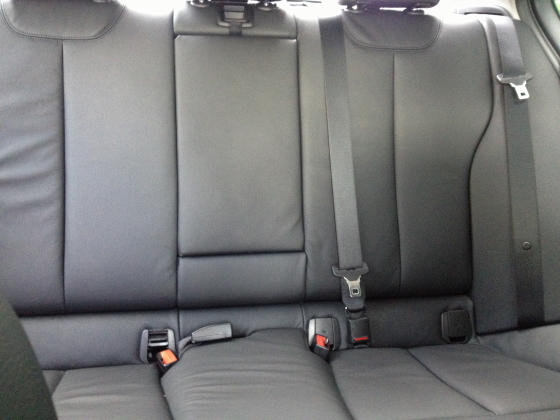 Driving round to Eastbourne in a Southerly is a real test of any driver’s mettle, the car feels solid on the road, and the pounding rain doesn’t phase the car.

After a quick café stop, where David said to the waitress…”Hold the ice, I don’t eat solids” …seriously, I don’t make this stuff up….. we went off driving.

And the driving part is actually fun in this car. The 320i doesn’t feel like its underpowered or lacking in get up and go -I was genuinely surprised. We headed up into the twisting hills of Khannndaaalaaaah….as our Sat Nav woman pronounced it and this car just felt a delight to drive.

Another thing, when driving was that everything felt familiar in the car. As I said, I’ve owned 3 BMW’s and when I jumped in it seemed so easy to know where things are. So anyone who has owned a BMW in the past will quite happily feel at ease in this cockpit. Can I say cockpit? Oh, yeah I can, because I’m not a real journalist and this is a little read blog.

Now, I know that all 2 readers of this blog want to know the more ‘grunty’ stuff about the car…or techy bits. So, for all you detail nerds out there, here are some of the more technical aspects:

So, Mr BMW, thank you for lending us the latest BMW 320i to test drive.

And judging from the feedback, all 2 out of 2 Kiwioil Blog readers agree this is a great car.

Anyone who wants to read more about the 320i, and I have no idea why, because I’ve said it all and more…here is the link to the official website:

No doubt will be full of boring advertising speak like…”So you’ve finally made it, why not go the extra step and really finally make it by driving a BMW, you deserve the best, no seriously you do, because you have finally made it…now punch the air”.

So that’s the review, and while having to hand back a cool car, I begin to doubt myself and think I haven’t finally made it, but my melancholy is rapidly replaced as I walk back into the flat and see the child-like delight on David’s face as he beams proudly;

“Hey, did you know that each individual pea is less than a calorie?”

I think how can life not be great!