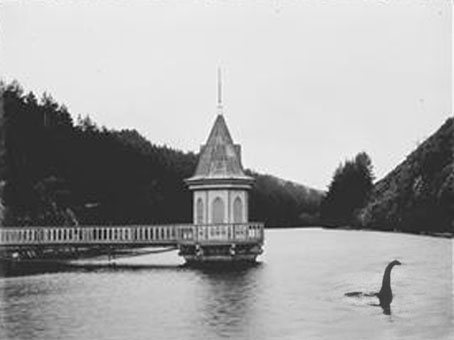 “Friends” of the Karori Historical Society

A local man on a Zealandia night adventure has snapped a photo which will change the course of New Zealand history.  His grainy but unambiguous photo clearly shows a Taniwha swimming near the Karori water dam.  While Taniwha have previously been considered legendary and/or extinct, locals and experts believe that the recent upgrade work on the nearby distribution tanks, designed to help provide emergency water to a parched Wellington, has stirred the elusive beast from its long slumber in the depths.

The current reservoir was built in 1925 but the Taniwha is likely to have taken up residence well before that and long before the development of sonar, photography and video cameras.  That would be only logical explanation why it has been largely undetected to date.  However, in recent days, several unnamed older members of the Karori Historical Society have claimed that their journal – “Stockade” – had recorded a number of previous sightings but they were reluctant to “go public” with the information for fear of ridicule.

Confronted with the soon to be famous photo, a senior Karori historian reluctantly confirmed that she was well aware of the earlier Taniwha sightings.  “Legend has it that there were two Wellington Taniwha – Whataitai and Ngake – when Wellington harbour was originally a lake.  Ngake lashed his tail back and forwards, and crashed into the great Seatoun wall of rock with such force that he smashed out into the open sea.  He swam off into the deep waters of Raukawa Moana (Cook Strait), and was never seen again.”

“It is just possible,” said the historian who refused to be named “that the other Taniwha found its way into the Upper Reservoir during the 1855 Earthquake and made his way down into the deeper waters of the lower dam – built between 1876 and 1878.  The creature would have then used the deep waters below the cliff to hide for decades.  It probably lived on ducklings, eels and gold shavings from the abandoned mine.”

In light of the new photographic evidence – easily comparable in quality to pictures of Big Foot, Elvis and the Loch Ness Monster – a glass bottomed boat is being readied for the expected influx of visitors including international media, biologists and extreme tourists.

Further sightings should be notified to the Acting Deputy Spokesperson for the “Friends” of the Karori Historical Society Mr David Bernard.