New Zealand’s ambassador to Beijing, Carl Worker, passed on a salient fact to Prime Minister John Key while they were waiting for President Xi to welcome them into the meeting room at the stately Bo’ao guest house.

If the southern Guangdong province (where Key arrived last night) were to break away from China – and there’s no suggestion it ever would – its economic strength is such it would immediately be in the G10, the top 10 economies of the world.

That’s quite extraordinary. That one province would make the G10.

Key recounted the fact on the balcony of his own hotel in Bo’ao before a mad dash to the airport for the next leg of his trip (to Guangdong) because the meeting with Mr Xi had gone well over time.

Mr Key was fizzing about the meeting about the state of relationship so far, the personal rapport between the leaders themselves but mainly because of the readiness of both parties to take it to a new level.

The fact that Key could raise something as serious as direct currency conversion between the Kiwi dollar and the reminbi with a senior minister at lunchtime and have it ticked off by Xi for further work in the talks a few hours later would make any former banker go giddy.

The possibility of direct currency conversion is fascinating. Not so much for what it means for China and NZ, but equally the decline of the US dollar as the global reserve currency. This is what happens when you start to print money because you are spending too much.

The scale of development is huge – Xi said yesterday within five years it is projected that China’s imports could be worth $US10 trillion.

He could see a day when 400 million Chinese a year could be outbound tourists.

I noticed in South Africa that a huge proportion of tourists were Chinese. As a Chinese middle class numbering several hundred million gets wealthier and spends more, the potential economic growth is immense.

Like other leaders Key planned to acknowledge Xi’s recent ascension to the presidency. But his main game was to position New Zealand as a valuable partner to China in developing global supply chains to feed its people. “It makes sense to team up with Chinese capital and use other countries’ land masses to produce food we can’t produce in New Zealand,” Key says.

New Zealand has limited arable land left for developing new farms. If the nation’s agricultural businesses want to expand, they should take their expertise overseas and form partnerships in countries with bigger land masses.

Which is why the Landcorp partnership with Shanghai Pengxin should be seen as a great opportunity, instead of being condemned by xenophobic MPs from the left. 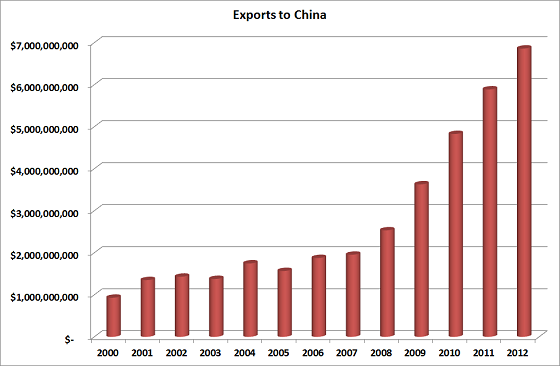 This graph shows annual exports to China. Readers will recall that the Greens and NZ First railed against the Free Trade Agreement with China signed in 2007.