After Juliet was written by Sharman Macdonald after her 13 year old daughter saw the film version of Romeo and Juliet and asked “What comes next?”. Macdonald’s daughter went on to act in the play itself, and is fairly well known today as Keira Knightley.

I greatly enjoyed the Circa production of After Juliet. It’s a lively sequel to the famous classic. Those with a good memory will recall that before Romeo loved Juliet, he had an unrequited infatuation for Rosaline. It turns out that the infatuation was in fact mutual, but Rosaline was just playing hard to get. Now Romeo is dead, and she blames the Montagues for it.

The play is produced by 1st Gear Productions, and all the cast were aged between 17 and 23. It was a nice showcase of emerging talent.  Neenah Dekkers-Reihana shone as the lead Rosaline. She was feisty and commanding. 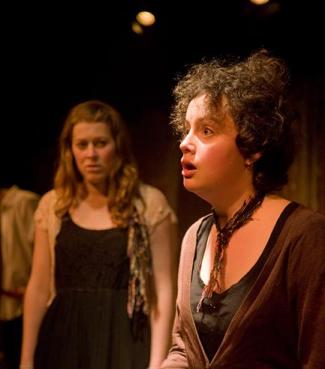 Also a great performance from Sylvie McCreanor who played Bianca. Bianca is a cousin of Juliet who suffers from petit mai seizures, and she is very convincing.

After the deaths of Romeo and Juliet there is a truce between the Montagues and Captulets, laid down by the Prince of Verona. You also have a number of trials of those deemed responsible for their deaths, such as the nurse and the apothecary that sold Juliet the poison.

Rosaline is torn between her lost love, her anger, and another apparently unrequited love interest. She wants the feud to continue, and is challenging to be leader of the “Cats”, the younger members of the Captulets. 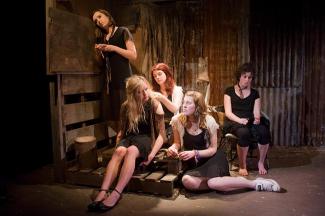 The set consists of a corrugated iron fence, a tangled scaffolding type tower where the Montagues gather, and at the bottom of it flowers marking the graves of Romeo and Juliet.

One thing I loved about the play was the mixture of old and new. you had Montagues and Captulets battling it out with swords, while some of the Montague girls were videoing it on their iPhones!  While it is an ancient setting, they used modern devices to get across that this could also be a modern day story.

There were a few good laughs during the play, but mostly it is dramatic tension between the various cast, and most of all to see whether it ends with war or peace – or both.

The play lasted 90 minutes, and I thoroughly enjoyed it. It was good to see a talented cast of younger actors and actresses and a sequel to a Shakespeare classic.

Also reviewed by John Smythe at Threatreview. It is on at Circa 2 until Saturday 8 June.