LG had a little expo down at Chaffers Wharf yesterday. I popped in for a bit, to see what they were promoting. I knew I’d be interested in the TVs, but to my surprise also found myself interested in one of their washing machines. 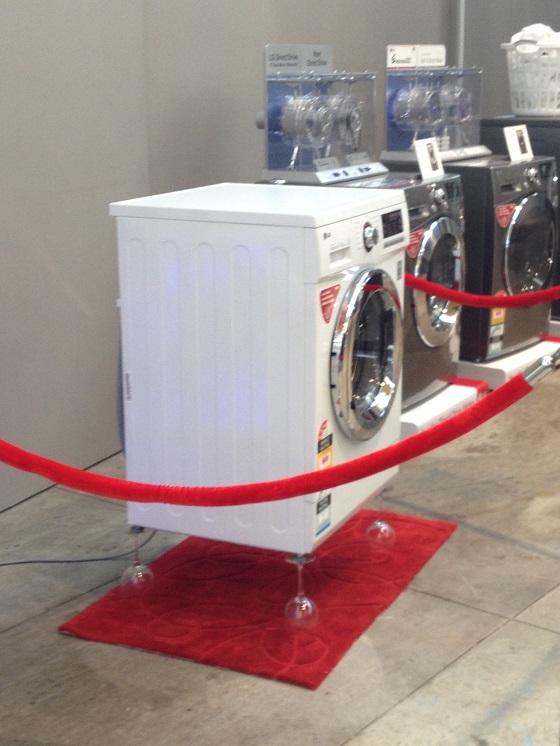 Yes that is a washing machine balanced on four wine glasses, and yes they demonstrated in action on a spin cycle, and it didn’t move at all. Whomever came up with the idea of demonstrating its lack of movement and vibrations with balancing it on wine glasses did well.

LG use a direct drive motor in their washing machines, and it really does make them both very quiet and also relatively still. I felt the machine as it was working, and you really just pick up minor vibrations from it – way different to most washers.

What I was really there to see though was this: 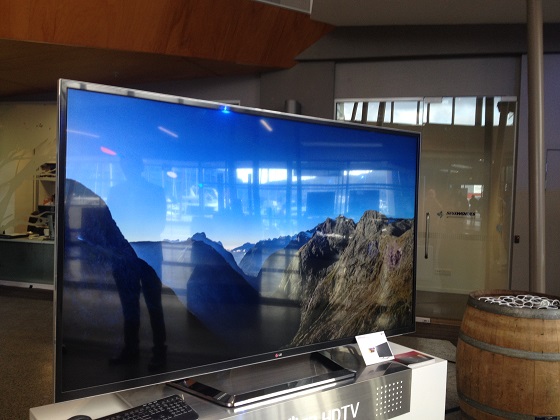 Ignore the reflection that makes this a bad photo, and try to concentrate on the colour. This is their 84 inch ultra high definition TV.

The picture quality is an incredible eight million pixels, four times the normal high resolution. And trust me you can tell the difference. The quality is superb. The resolution is 3840 x 2160.

It also does 3D television. We watched a few minutes of Life of Pi, and it really was just as good as watching it in the cinema.

The TVs are $25,000 so really for pubs and bars or commercial offices. They will be rolling out a 55 inch model later this year, and are pricing it up at the moment.

All the TVs there now come with an ethernet port and built in WIFI. Clearly the future is TVs running programmes off the Internet or local computers. My only worry is what many GB would a one hour TV show be at ultra high resolution – can anyone do the sums?