Midnight in Moscow, at Circa, is a lively story of love, loyalty and politics. It is set in the NZ Embassy in the USSR in 1947. At times it is a bit like a murder mystery, but instead of working out who was the killer, it is more who was the spy?

You also get intrigued by whether that gay man and the young girls’ blossoming friendship may in fact be something for her aunt to worry about. Will the wife find out her husband’s affair with the mistress of Boris Pasternak?

There is of course a political theme to the play, as expected from playwright Dean Parker. Young Madeleine (played by Chelsea Bognuda) have a naive appreciation of the wonders of the worker’s paradise. Her aunt, and head of mission, June (Carmel McGlone) lays out the reality of what the Soviet Union was really about – political prisoners and repression.

Other embassy staff have some surprising views, which reveal themselves during the play.

The star of the show for me was Gavin Rutherford as the witty, urban, flamboyant and promiscuous Kit. His character provides many of the laughs. he provides the signature quote from E M Forster “If I had to choose between betraying my country and betraying my friend, I hope I should have the guts to betray my country”. Stephan Papps also excels as Boris Pasternak.

Jon Pheloung and Jessica Robinson play husband and wife Hugh and Sophie. Hugh is helping the famous Boris Pasternak  translate Doctor Zhivago into English, and also having an affair with Boris’ mistress Olga (Miranda Manasiadis). Hugh’s character is based on NZ diplomat Patrick Costello, who was suspected of being a Soviet spy. The debate continues today as to whether he was. For my 2c I think he was.

There is a chilling moment when Pasternak gets a phone call from Moscow, and it turns outs to be Stalin himself. This is of course based on real life, and I’d encourage people to read the awful treatment of Pasternak and other authors under the USSR. 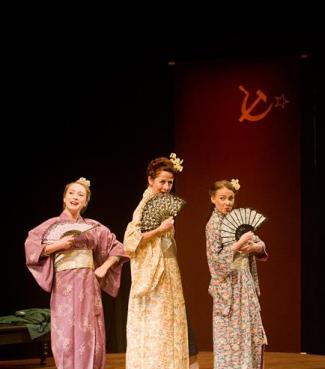 Parker has crafted a very clever play that shows how awful the USSR was (and certainly was not an apologist for it as a Herald review suggested). There were also some lovely moments such as when the three female staff rehearsed for their role in The Mikado, bing out on by the British Council.

I enjoyed the play, but I did have a couple of criticisms. 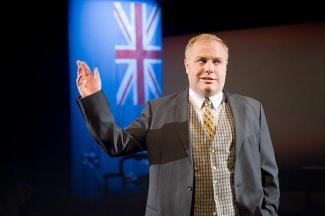 The set was very well done, but I found the suits worn by the men (especially Kit) did not look anything like the 1940s. They looked like very modern suits. Maybe I’ve been spoilt by how well shows like Mad Men get the look and feel of an older era so well, but the suits did jar with me, as not fitting into the era.

Another minor point was the idea that a woman would be head of delegation in 1947. I know of course that a play is fiction, but again it made it harder to get into the play. The best plays are where you forget it is a play, and you are one the edge of your seat wondering how it will all end.

I also like a play that grabs your attention at the beginning, and found the opening monologue didn’t quite do that. Also the poetry scene with Hugh and Pasternak went on a bit too long for my simple tastes. The play lasted two hours 15 minutes (plus a 15 minute interval). I thought the first half dragged on a bit and could have been shorter or brisker. The second half though was much more enjoyable, and overall was a very good production.

John Smythe at Theatreview has also reviewed the play. It runs at Circa One until Saturday 8 June.

UPDATE: I am informed that in fact the head of delegation in 1947 was indeed a woman, so wasn’t NZ progressive!