It is well known you can not distribute pre-filled in or pretend ballot papers. We’ve had this law for decades. But Labour’s Ikaroa-Rawhiti candidate facebooked this (now deleted): 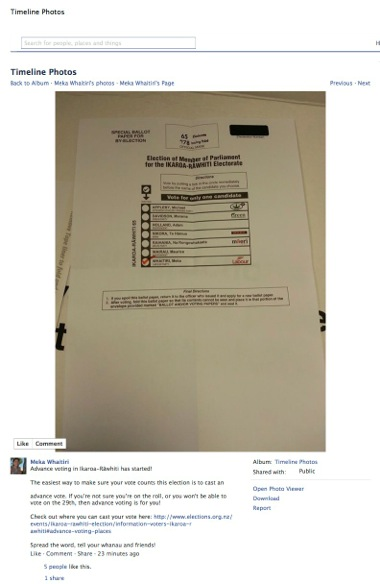 You can see above Labour’s candidate facebooking a filled in ballot paper, and even worse promoting it for advance voting.

UPDATE: A reader says this came up in their timeline as sponsored, which means it is a paid advertisement by Labour. If so, that is even worse.

UPDATE2: Only an offence if done within 3 days of polling day, so not a law breach. I should have checked the Electoral Act rather than go off memory. Happy to state that on this occasion, Labour is not breaching electoral law, and my regrets I got it wrong. May this exception become the norm.