C – A Musical is a musical about the Big C, or cancer. Paul Jenden is a long-time creative force at Circa, but this time the production was about himself – his battle against chronic lymphocytic leukameia.

It’s a sad topic for a musical, and at parts of the show, you do feel downright depressed. Mortality is not an easy topic. But despite that, the show is also uplifting and great fun.

It’s not a typical musical.  It is described as a play with song and poems.

Danny Mulheron plays Jenden himself, and is captivating and lively. He is so convincing, you would think he really was Jenden, the way he described the chemotherapy, receiving the news etc. 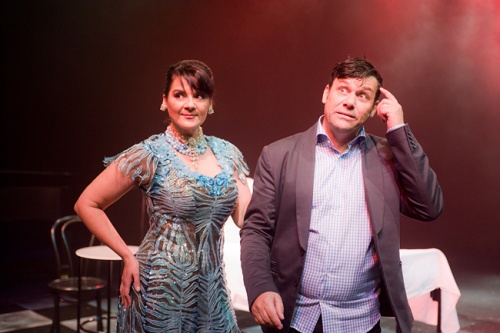 Beyond any doubt the star is Jackie Clarke who plays the voice inside his head, and sings the songs. Clark is simply fantastic and was a knock out. Her acting, her voice, her costume were all flawless.

Jane Waddell plays Paul’s Mum, who died from cancer also. Some very poignant scenes, but also some funny ones. The one that sticks in my mind is when she is talking to an angel and keeps asking him how much more time she has. He keeps avoiding the question until he finally points out that if you are talking to angels, the answer is pretty obvious!

Sue Alexander does an excellent job on the piano and Louis Solini silently plays Carcinoma most effectively.

On the technical side, the lighting used was done incredibly well. Great use of lights to capture emotions and states.

Most of us know someone who has fought cancer – some successfully, and some not so. The lyrics of “say si si to C” are a statement we can all aspire to.

As I said the play is not a barrel of laughs. At times it is very funny and uplifting. At times very sombre and sad. You ride a bit of an emotional roller-coaster, but well worth seeing.

Threatreview also has a review.