Well it seems that the Labour Leader is not too keen on his own party’s proposed man ban. Vernon Small at Stuff reports:

Labour leader David Shearer may be on a collision course with the party’s Left-wing rank and file over proposals to ensure half its MPs are women – a move that would also allow for “women-only” candidate selections.

Mr Shearer declined to comment yesterday, saying through a spokesman it was “just a proposal to conference”.

But he is expected today to say that while he is in favour of more women MPs he is not convinced a quota system or a “man-ban” in some seats is the right way to achieve that.

Yet, it is the party’s ruling Council that has proposed these. Is he not a member of the Council? Did he get outvoted? Quite possibly. Remember that the party rank and file pushed through leadership rules with a special provision to make it easier for Cunliffe to challenge Shearer at the beginning of the year. He has little support at the grass roots. So where did this idea come from?

Well I blogged last year on these proposals from Auckland Central Labour Party:

So I do wonder if Jacinda is in favour of the man ban? Is this a way of stopping a challenge for the Auckland Central nomination? Or is this how they plan to stop John Tamihere winning the Waitakere nomination?

Labour added to its woes yesterday claiming in a press release it had 15 female MPs in its 34 MP line-up. It actually has only 14, even after the addition of Ikaroa-Rawhiti MP Meka Whaitiri.

So the question has to be, which male Labour MP did Labour mistake for a woman?

Josie Pagani, who stood for Labour in Rangitikei in 2011 was baffled by the move.

“I can’t understand why the Labour party would be emphasising something like this when they’re trying to get the focus on jobs and power prices and the need to get wages up, so strategically it doesn’t make sense to be talking about this right now,” she said.

“Certainly I wouldn’t stand in a seat where I felt like the implication was I couldn’t win it on my own accord without some ‘special help’,” she said.

This is the sad thing. While the motivation is good – to get more women into Parliament, it will in fact degrade and undermine female MPs. If you win a selection where men are banned from standing, then you will have less moral authority as having won your seat fair and square.

The proposals would also require the party’s list to showcase a mix of ethnicity, gender, geographical spread, sexual orientation and disability representation.

The Moderating Committee shall be bound by the need to arrive at a list which fairly represents tangata whenua, gender, ethnic groups, people with disabilities, sexual orientations, and age and youth.

Gingas will be upset that they are not yet on the list of groups that must be on the list. Labour are following Greens down the path of having quotas for their list ranking, so I’ve graciously given up some of my time to calculate how they can best balance their list, as I previously did with the Greens. 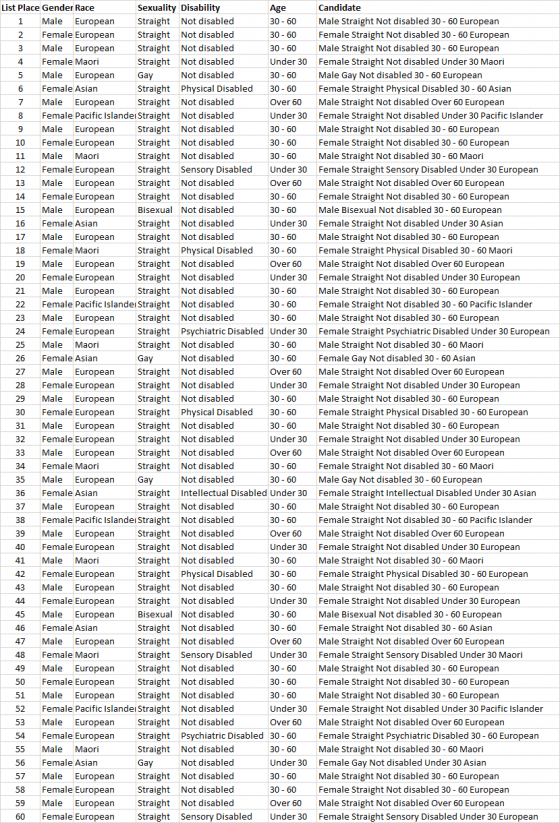 I hope Labour finds this useful as they can just pop candidates into the slot reserved for them. The data used to compile this balanced list for them is:

I see Grant Robertson is a supporter of the new proposed rules. Sadly for him, he will have to be demoted to No 5, and Jacinda rise to the No 2 spot.

You wonder whether a Labour Government will also introduce this to the wider public and private sector? They could insist of a 50% female quota for Cabinet, and also require the public service to have female only selections for public sector chief executives. And why not a gender quota for private sector company boards also?

A good post by Josie Pagani on this issue:

I’m not against quotas.

In Afghanistan, young girls are denied education because there aren’t enough women leaders. Women are victimised and systematically deprived of security, livelihood and other basic rights because they are women. In that context quotas for female representation in parliament are one of the most pressing issues facing that country.

Quotas have a place as temporary measures. They’re a kickstart to getting women into powerful positions. They have their place.

But in New Zealand? I would prefer Labour to be talking about incomes, jobs, power prices, housing. Instead here we are once again trying to defend the merits of a policy to  people who are open-mouthed in amazement at Labour’s priorities. Here we are using precious political oxygen trying to explain why it’s not really a ‘man ban’. We have so much more to do for women than this.

A strong women candidate does not need the handicap of people thinking she has only been selected because she is a woman, not because she is qualified.

Quotas and bans say that Labour women are not good enough to be selected ahead of men on our merits. I wouldn’t want anyone to think that of me. Helen Clark and Julia Gillard were capable of winning elections without removing men from the contest. We are not helpless dearies who need a bit of a leg up from a fixed race.

Quotas for women will undermine all women MPs. They’ll be seen as tokens.

The democratic principle at the heart of progressive politics is that any person is as good as another, we all deserve a fair go. Quotas say that what we are is more important than the content of our character or our ability to represent Labour values.

Andrew Geddis blogged here on Pundit that even David Cameron supports women-only pre-selection. But if the UK Conservatives can adopt gender quotas then there is nothing intrinsically progressive about the idea. It’s just something you do instead of making the meaningful changes that are needed to bring more qualified women through.

Also the UK has FPP. MMP allows a party to have a more diverse caucus. But quotas are a sign of no confidence in the party’s ability to balance up the complex mix of skills, geography and diversity. It is saying we want you to make sure half the caucus are women, regardless of the fact that the last woman in may be massively less competent than the man who misses out.

Labour subtly discriminates against parents. Meetings are scheduled right around bath time or over entire weekends. Pandering to internal blocs is valued over talent developed in community contexts.

We should be seeking out the women in our communities who go on school camps, sit on their school board or coach local sports teams. We should be head hunting women in the workplace who are proving themselves every day alongside male counterparts. You can’t expect these female leaders to play the silly palace politics needed to get ahead in the Labour party.

Fix childcare. Fix flexible work hours. Fix private sector recruitment so that talent gets promoted there, too, and then recruit leaders from there, from the school gates and the weekend sports fields, instead of from the internal power blocs. And value parenting as much as political parties value political networking. I would like to see all that before they put another fix in to the selection process.

Quotas and a man ban are a snake oil solution. They are an easy fix, that does nothing to get to grips with the underlying reasons why we have fewer women MPs.

Anyway me quoting something Josie says with approval, will sadly send her down three or four places on Labour’s list, regardless of quotas! They may have to reclassify her as a man, to prevent her being selected!