A guest post by Kiwi in America on the Christchurch East by-election:

Acknowledging these trends and in comparing it with the previous three BEs (all held since National assumed office in 2008), Christchurch East’s result was not exceptional.

Labour (and left friendly commentators) have made much of Poto Williams getting 61% of the total vote being a 7% increase from the 54% that Leanne Dalziel got in 2011. However the Christchurch East BE vote for Labour was only 52% of its 2011 GE vote. This was a smaller percentage than the Labour vote achieved in the previous three Bes. In Botany, Labour’s BE vote was a hefty 67% of its 2008 GE vote, in Mana in was 61% of its 2008 GE vote and in Mt Albert it was 65% of its 2008 GE vote.

What happened in Mana

Whilst Mana has historically been a safe seat for Labour, Kris Fafoi only managed to eke out a paltry 1,400 vote majority for Labour in the November 2010 BE. Hekia Parata (already a list MP) managed to keep National’s vote at a staggering 80% of its vote in the 2008 GE and increased National’s share of the vote by 6% from 35% to 41% – something quite rare in BE history. Turnout was also very high at 54% of registered voters and 67% of the number who voted in the 2008 GE!

The result in the 2013 Christchurch East BE was very similar to what happened in the 2009 Mt Albert BE. A popular long standing sitting MP vacates a very safe Labour seat. National chose candidates who fought what could only be classified as very average campaigns in each BE. Matthew Doocey is not a rising star in the mould of say Simon Bridges and Melissa Lee, whilst already a List MP, made a number of pratfalls in the Mt Albert campaign. Given the historical trend of the Labour vote in both of these safe Labour seats, National’s head office were not going to devote much in the way of funds or personnel to fighting a hard campaign in seats they were never going to win. Thus the respective GOTV operations of the Doocey and Lee campaigns were largely down to the candidate’s capacity to motivate local National Party members. The importance of the local team the candidate puts together cannot be underestimated. Having fought in a few BEs, the quality and size of the team can make a huge impact on the eventual vote as turnout in BEs is crucial. Hekia Parata’s outstanding result could be put down to her putting together an aggressive and well organized team. Plus, whatever people might think of her skills as Minister of Education, she is a much more formidable campaigner than Doocey or Lee.

On the Labour side, Cunliffe had much to lose if the Christchurch East result was a repeat of the Mana result. Whereas in Mt Albert, Clark’s tenure there attracted some good electorate workers AND the candidate (David Shearer) was a handpicked high riser with an intriguing background with the UN, the Labour team in Mana were poorly organized and it would be fair to say that Winnie Laban had taken the Labour vote for granted in what had been a long standing safe Labour seat. Fafoi thought his media experience and name recognition would be enough but he was an entirely inexperienced candidate so you add a poorly staffed local electorate who had never really had to work hard to elect their MP with a novice campaigner against a crack local team behind an excellent campaigner and you can see how the Mana BE result happened.

Labour’s team needed to lift its game from even the Mt Albert BE because of the need to avoid an embarrassment to its new leader and because National had won the party vote (narrowly) in Christchurch East in 2011. Thus it was that much time and effort was put into Labour’s Christchurch East BE campaign. This began with deliberately siting the 2013 Labour Annual Conference in Christchurch and sending the 500 odd delegates out to canvas for a whole afternoon. As an organizer of canvassing efforts, I know that this would be enough people and time to be able to identify all Labour leaning voters in the electorate (which had 5,000 fewer enrolled voters than in the 2011 GE which in turn was down almost 10,000 enrolled voters on the 2008 GE due to earthquake related out-migration). Enter Jim Anderton, a veteran operative of the left who many may have forgotten was the Labour Party President from 1979 until he took over the Sydenham seat from the retiring and lackluster John Kirk in 1984. Anderton made sure that Labour had an excellent election day GOTV and that was off the back of now accurate canvassing records – something that was difficult to do given the upheaval and movement of people in the electorate since the earthquakes.

In many respects given how much Labour threw at the BE in Christchurch East up against a novice National candidate with zero name recognition in an electorate probably the most hostile to the government than any in the country given the anger and frustration of voters over the insurance related rebuilding delays and infrastructure chaos, this is actually not that bad a result for National. It’s true that Shearer was a ‘sexier’ candidate in Mt Albert than Poto Williams but really in so many ways the Christchurch East BE result was very close to the Mt Albert BE result.  Labour and its cheerleaders have already read too much into the result. National do have cause to be concerned in that its strong party vote showing in Christchurch in 2011 was an integral part of its nationwide winning margin.

In by-elections, getting out your vote is everything. National’s turnout in the 2011 GE was lower than all the polling showed partly because of the teapot tape kerfuffle but also because its soft and low information voters heard the ‘govern alone’ mantra and figured John Key was all good and didn’t need their vote. If National invests in a thorough and extensive nationwide Party vote GOTV effort, they will be able to weather almost any campaign storm that inevitably the left leaning media will throw at them, especially if the economy continues to gather steam and the Christchurch rebuild sees more residential homes targeted. 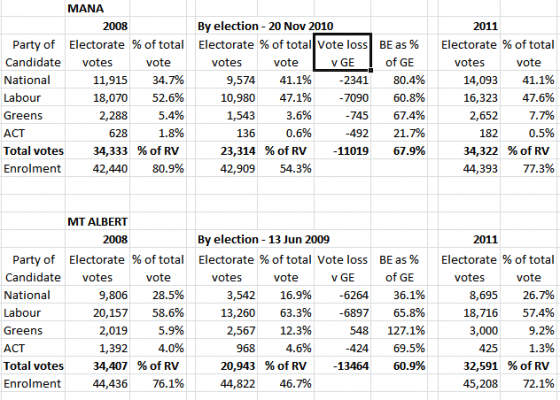 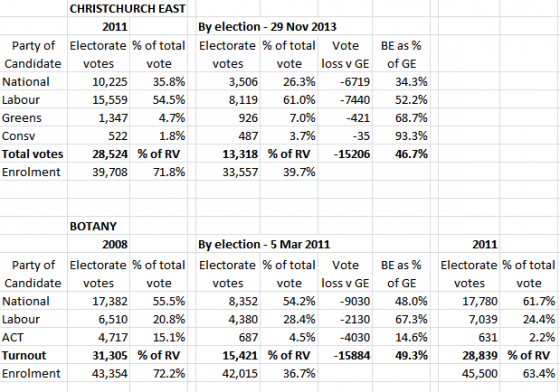 In order to accurately determine the voter turnout percentage to be calculated, for all the GE results, the total number of enrolled voters for each electorate came from the Electoral Commission’s published number of enrolled voters eligible to vote in that electorate at that election. For the BEs, the total number of enrolled voters for the BE was taken from media kits released for the specific BE by the Electoral Commission. The exception was the Mt Albert BE where no BE total enrolment figure was released in the media kit. In order to approximate that figure, the increase in enrolled voters in Mt Albert between the 2008 and 2011 GEs was halved and then added to the 2008 enrolment total on the premise that the voting population of the electorate was rising slightly over time and that the size of the roll at the time of the BE was somewhat between the roll of the GEs on either side. Given that the roll increased by only 772 voters, this approximation does not mean the voter turnout percentage for the Mt Albert BE  is very far off being 100% accurate.

Thanks to Kiwi in America for the analysis.