Well the Duke and Duchess are touching down in Australia amidst a political storm.  Barry O’Farrell, Premier of New South Wales has just resigned. O’Farrell’s statement to media says:

“I’ve been advised overnight that this morning at ICAC a thank you note from me in relation to the bottle of wine will be presented. I still can’t recall the receipt of a gift of a bottle of 1959 Grange, I can’t explain what happened to that bottle of wine. But I do accept that there is a thank you note signed by me and as someone who believes in accountability, in responsibility, I accept the consequences of my actions.

“The evidence I gave to the independent commission against corruption yesterday was evidence to the best of my knowledge. I believe it to be truthful and as I said yesterday it’s important that citizens deal with police, deal with the courts and deal with watchdogs like ICAC in a truthful fashion.

“In no way did I seek to mislead, wilfully or otherwise, the Independent Commission Against Corruption. But this has clearly been a significant memory fail on my part, albeit within weeks of coming to office, but I accept the  consequences of my actions. And that is that as soon as I can organise a meeting of the parliamentary Liberal party for next week I will be resigning the position and enabling a new Liberal leader to be elected, someone who will then become the Premier of NSW.

“Whilst I’m sure you have questions, I don’t think this is the time for those questions to be dealt with. There will be other occasions for those questions to be dealt with. But what’s important here is that again I’m seeking to support  the process of the Independent Commission Against Corruption, a body that I’ve always supported throughout my career. I’ve accepted that I’ve had a massive memory fail, I still can’t explain either the arrival of a gift that I have no recollection of or its absence, which I certainly still can’t fathom.   “But I accept the consequences. In an orderly way, a new leader will be elected to take on the position of Premier of NSW.”

So it was the bottle (wherever it may be) and his own thank you note that did it. 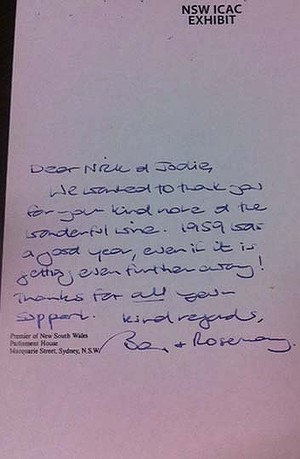 Now the fun part.  Who will be the next Premier?  My pick is Mike Baird.