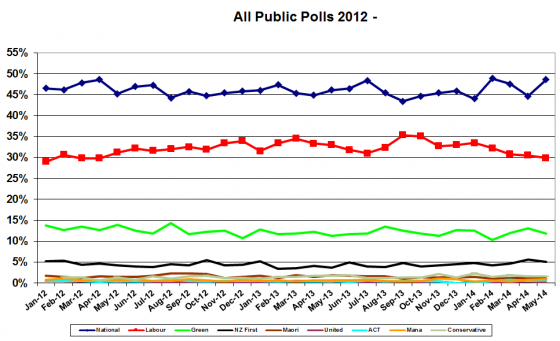 That trend for Labour is very pronounced!

The newsletter summary is:

There were just four political polls in May – a Roy Morgan, a One News Colmar Brunton, a 3 News Reid Research and a Fairfax Ipsos.

The average of the public polls has National 19% ahead of Labour in May, up 5% from April. The current seat projection is centre-right 62 seats, centre-left 52 which would see a centre-right Government.

In Australia PM Tony Abbott’s approval rating has plummeted in the aftermath of the Budget. In one month it has gone from a net -10% to a net -29%. Two months ago he was 6% ahead as Preferred PM, and now is 11% behind Bill Shorten.

In the United States little change in the US this month, despite the scandal over veterans’ care.

In the UK Labour has a narrow 3% lead over the Conservatives but Ed Miliband continues to have awful approval ratings. The UKIP was the big winner in the Council and European elections. Scottish independence polls show the no vote ahead by 7% to 12% with an average 10% gap.

In Canada the Liberals and Conservatives are projected to be almost neck and neck in terms of likely seats won.

The normal two tables are provided comparing the country direction sentiment and head of government approval sentiment for the five countries. A new third table has been added, comparing approval ratings for opposition leaders in the four countries that have one.

We also carry details of polls in New Zealand on the Budget, immigration, house prices, interest rates, spending, marriage and smacking plus the normal business and consumer confidence polls.