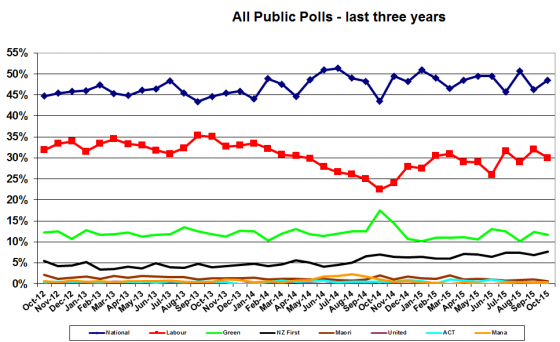 The monthly newsletter is out:

There were two political voting polls in October – a Roy Morgan and a One News Colmar Brunton.

The average of the public polls has National 19% ahead of Labour in October, up 5% from September. The current seat projection is centre-right 61 seats, centre-left 50 which would see a National-led Government.

In the United States a good month for Clinton and Carson. Biden’s withdrawal has seen Clinton gain 12% in primary polling and Ben Carson has gained 7% to be a dominant 2nd to Trump.

In the UK Jeremy Corbyn has a net approval rating of -19% after two months in the job.

In Australia Bill Shorten appears to be in serious trouble. Malcolm Turnbull has a +35% net approval rating while Bill Shorten is on -32%. Turnbull leads Shorten as Preferred PM by 63% to 17%.

In Canada no polls since the election. The polls were quite accurate but the seat projections were not.

The NZ poll comparison is: