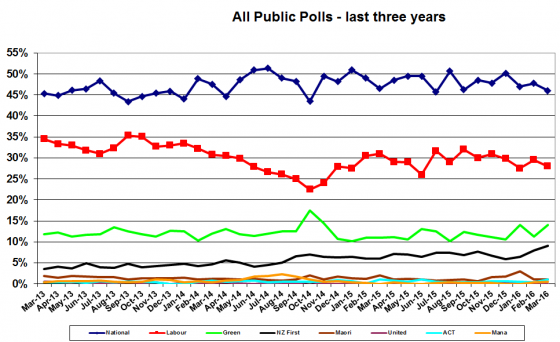 Curia’s monthly newsletter is out. The executive summary is:

There was one political voting poll in March 2016 – a Roy Morgan.

The average of the public polls has National 18% ahead of Labour in March, the same as February. The current seat projection is centre-right 58 seats, centre-left 51 which would see NZ First hold the balance of power.

In the United States Obama now has positive approval ratings for the first time in many years. The prediction markets have Trump at 44% likely to win the GOP nomination and Cruz at 36%. Clinton is at 83% to be the Democratic nominee.

In the UK polls show Remain just 3% ahead of Leave in the EU referendum.

In Australia the Coalition remain ahead of Labor but Turnbull’s approval rating continues to decline.

In Canada the Liberals have dropped 4% this month but remain well ahead in the polls.

We also carry details of polls on the NZ flag and cannabis plus the normal business and consumer confidence polls.