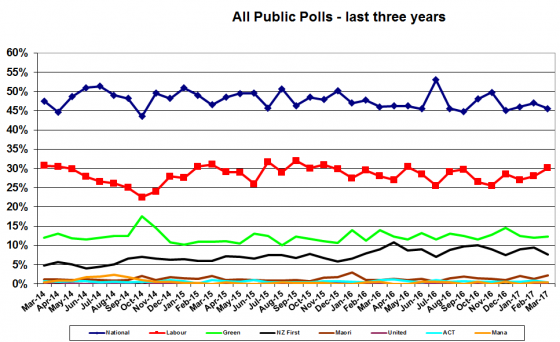 The newsletter summary is:

There were three political voting polls in March – a One News Colmar Brunton, a Newshub Reid Research and a Roy Morgan.

The average of the public polls sees National 16% ahead of Labour in March, down 3% from February.

The current seat projection is centre-right 58 seats, centre-left 52 which would see NZ First hold the balance of power.

In the United States Trump’s net approval has dropped 11% in March. His failure to get a health care bill introduced saw his healthcare rating drop 18%.

In the UK Theresa May has a net approval of +13% compared to 41% for Jeremy Corbyn.

In Australia Labour remain well ahead of the Coalition.

In Canada the Conservatives have now closed the gap with the Liberals to 5%, compared to 14% a year ago.

We also carry details of polls on superannuation, Labour leadership, housing, immigration, and the normal business and consumer confidence polls.