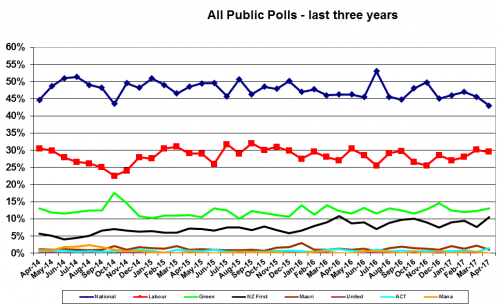 Curia’s monthly polling newsletter is out. The summary is:

There was only one political voting poll in April – a Roy Morgan. Hence the average represents just that one poll.

The average of the public polls sees National 13% ahead of Labour in April, down 3% from March.

The current seat projection is centre-right 55 seats, centre-left 52 which would see NZ First hold the balance of power.

In the United States with the House passing a healthcare bill, Trump’s approval rating rose in April.

In the UK since calling a snap election the Conservatives have gone from a 18% lead to a 22% lead and are currently projected to win 413 out of the 650 seats in the House of Commons.

In Australia, the Coalition has closed the gap on Labor over the last two months.

We also carry details of polls on pornography and the normal business and consumer confidence polls.