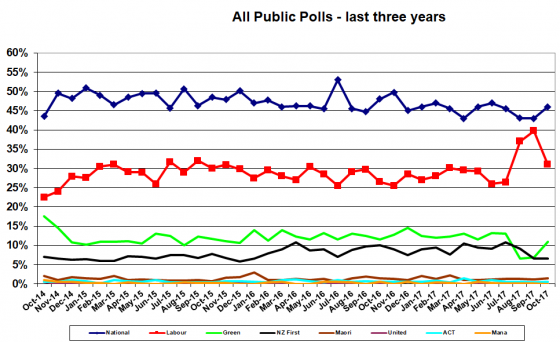 The latest public polls. Note only one poll in October which was done after the election but before the coalition decision.

There were six political voting polls in September – a Roy Morgan, two Newshub Reid Research and three One News Colmar Bruntons.  Since the election there was one Roy Morgan poll in October.

The seat projection for September was centre-right 54 seats, centre-left 57 which correctly forecast NZ First holding the balance of power. In October, it is CR 58 and CL 52.

National’s party vote in October was 2% below a year ago and 2% higher than three years ago.

In the United States Trump’s net approval rating has worsened to -18%.

In the UK, Theresa May’s net approval slumps further to -24% as rumours of a leadership challenge abound.

In Australia, Turnbull has also had a very bad month with his net approval falling to -28%.

In Canada, the Liberals are currently projected to win 179 out of 338 seats.

We also carry details of polls on medical cannabis as well as business and consumer confidence.