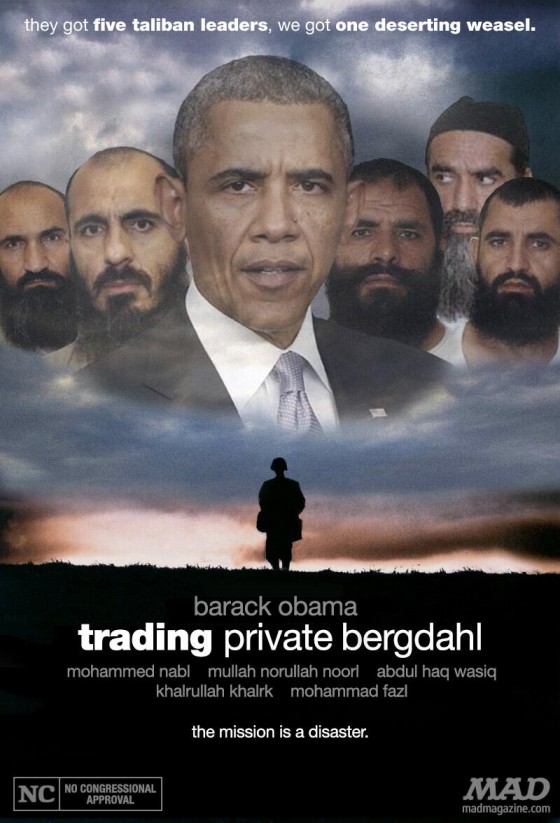 Mad Magazine are the latest to pile into Obama on his trade of an American POW for five Taliban held at Gitmo. Bergdahl appears to be a deserter, and while this doesn’t mean you don’t try and recover him, it does suggest the five to one trade was far too high. Even Democrats are now attacking Obama on this.

James Taranto at the WSJ writes:

“If I’ve lost Neuman, I’ve lost Middle America.” That’s how we imagine President Obama reacting to being scathed by MAD magazine. The Usual Gang of Idiots tweeted a parody poster yesterday for “Barack Obama’s Unfortunate New Movie,” titled “Trading Private Bergdahl.” The tag line: “They got five Taliban leaders. We got one deserting weasel. The mission is a disaster.” Obama is depicted as the lead actor, with the Taliban quintet in supporting roles. The picture is rated “NC” for “No Congressional Approval.”

How in the world did an administration known for political competence, if for no other kind, manage to pull off such a public-relations disaster? The answer is that the left has a very large blind spot when it comes to military culture.

There’s been speculation that the White House intended the Bergdahl release as a distraction from the Veterans Administration scandal. Certainly it has served as such a diversion, not to mention a reminder to be careful what you wish for.

Adding to Obama’s woes is that there is a law saying the President must notify Congress 30 days before the release of any prisoner from Gitmo. Obama ignored the law, as he indicated he might do when signing the law.  This is not uncommon – but the heads of the relevant congressional committees were not even given a heads up in advance – and they are very peeved.

Obama is in his final term. This will however reduce his ability to get much done in the last two and a half years of his term. It also gives the Republicans another weapon for the mid-terms.