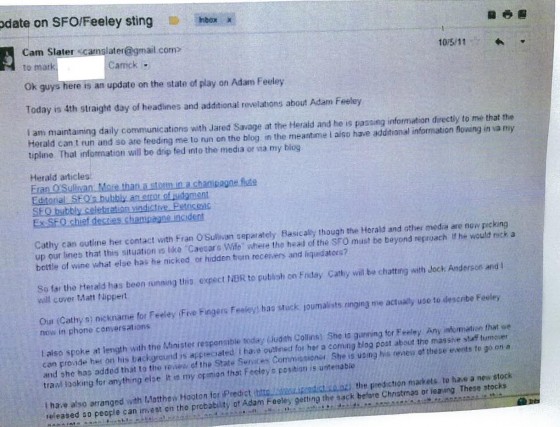 This is the e-mail released by the PM’s Office. Obviously it has impacted Judith Collins, but if you read the whole thing you’ll see it backs something I have said consistently.

Cameron deals with a huge range of people, including Labour MPs, Green MPs, and almost every media organisation in NZ. The book only showed you his interactions with people associated with National, but this e-mail includes media contact with no less than four different journalists. One specific quote:

I am maintaining daily communications with Jared Savage at the Herald and he is passing information directly to me that the Herald can’t run and so are feeding me to run on the blog.

Now let me say again that what Cam says in an e-mail is his interpretation of events. I regard Jared Savage as an excellent investigative reporter. But the e-mail does lead to questions being asked. How is media giving Cam stories, different to a press secretary doing so?

Is the Herald going to say that everything Cameron wrote about his dealings with us is incorrect, yet everything else is correct?

Will other media subject Herald reporters and editors to the same level of inquiry that they have subjected others named in the hacked e-mails to?

As I said I have high regard for Jared Savage. The point I am making is consistency.