Economists now expect the Reserve Bank to keep interest rates on hold until September next year after inflation in the September quarter proved even more benign than it had forecast.

The consumers price index rose 0.3 per cent in the quarter, when the median market forecast had been 0.5 per cent and the Reserve Bank’s 0.7 per cent.

Westpac and ASB have pushed back their forecasts of when the Reserve Bank will next raise the official cash rate to September 2015.

That will be welcome news to everyone with a mortgage. 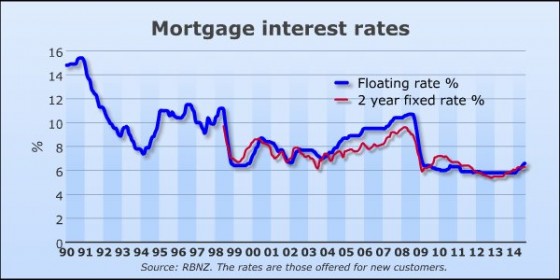 As this graph from the Reserve Bank shows, home owners have had the longest period of relatively low interest rates in 25 years.