Landed at La Paz, Bolivia at 3 am so did little the first day except sleep, and a walk around the neighbourhood. 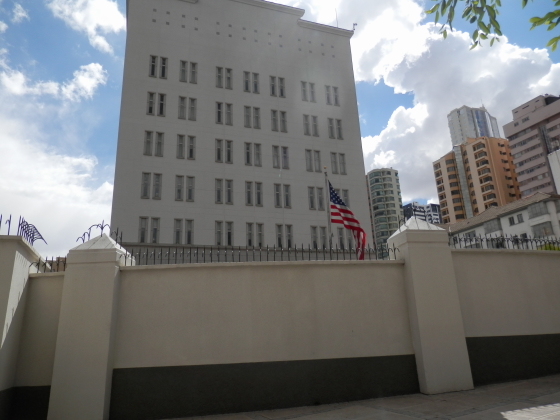 We’re staying in the diplomatic area. This is the nearby US Embassy. 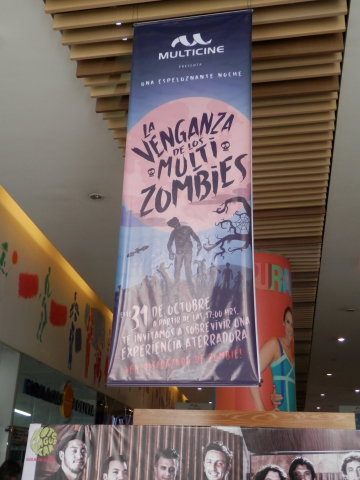 Even in Bolivia, zombie movies are the rage. 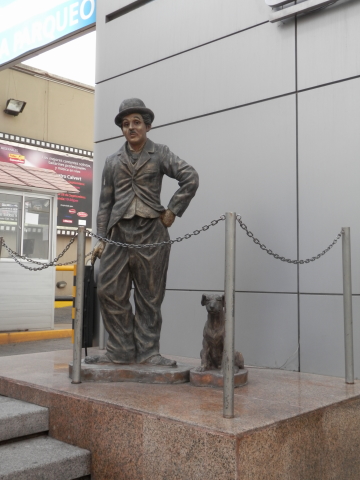 A statue of Charlie Chaplin. He is credited with inspiring the introduction of the bowler hat to the Quechua women in Bolivia. 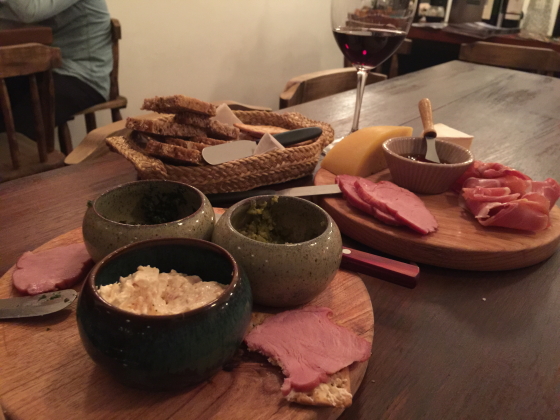 Thanks to Trip Advisor, found an excellent tapas wine bar. 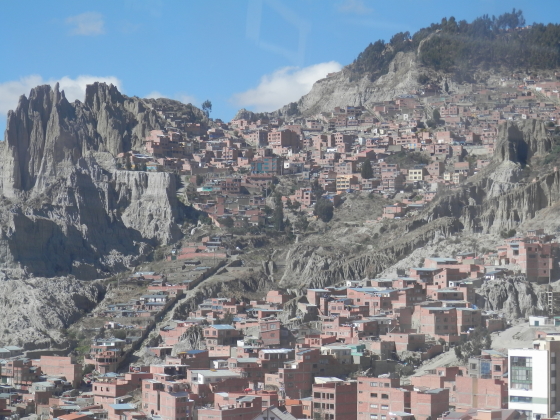 The next day we did a half day tour of La Paz. It is truly a mountain city. At the top you are above 4,000 metres. 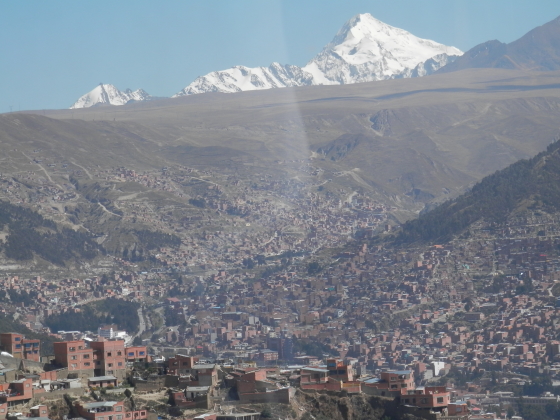 They have built almost everywhere/ 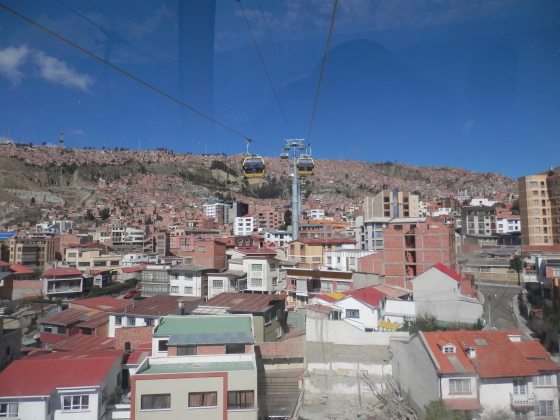 We were very lucky that this gondola opened just a few weeks ago. A great way to get around, and to get to the top. 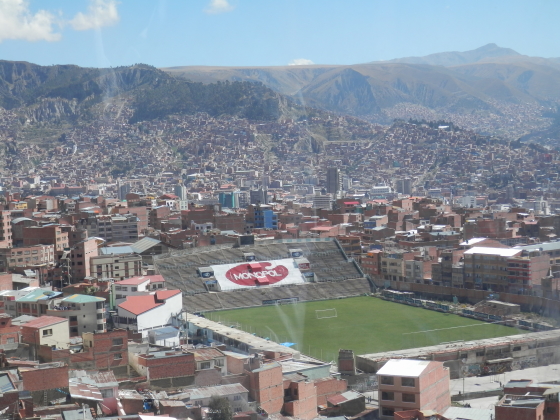 One of their many football grounds. La Paz is the only FIFA approved ground in the world over 2,500 metres. There was a lot of lobbying to have it approved. 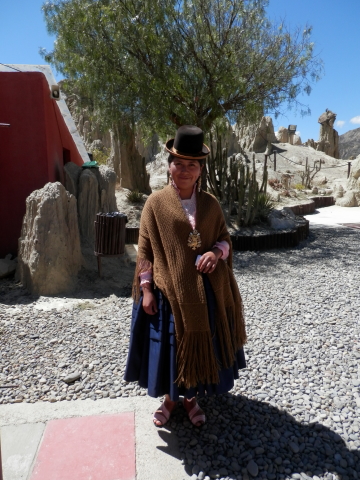 A Quechuan in native dress. 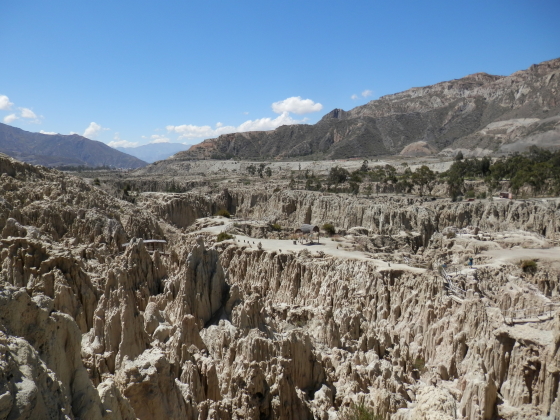 Did a quick our around Moon Valley. 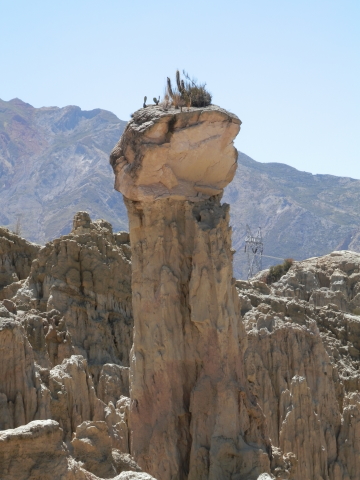 Love this clay structure which looks like some sort of lizard. 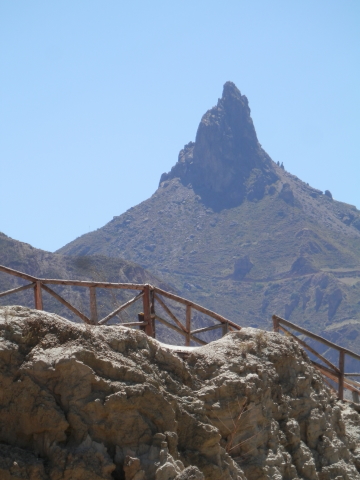 This peak is called Devil’s Tooth. 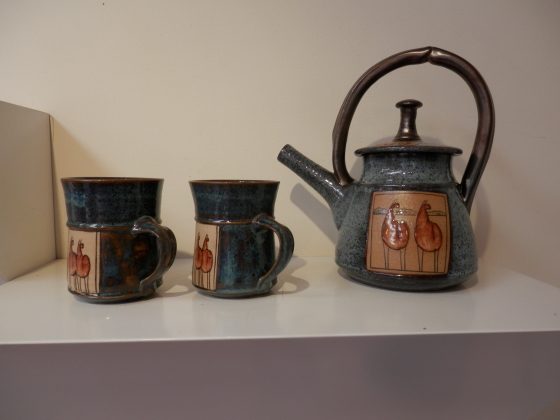 Also toured a local craftsman where we purchased the mugs above, and some jewelry. 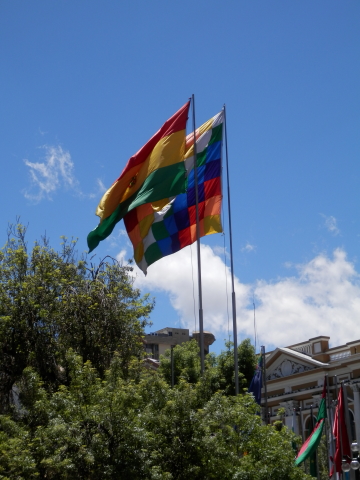 The frotn flag is the flag of Bolivia and the more colourful one behind is the indigenous flag. 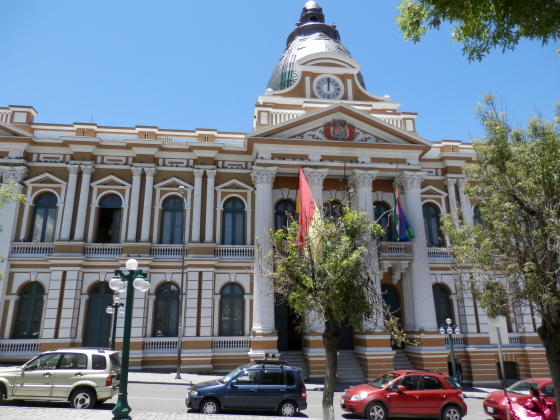 This is their Parliament Buildings. 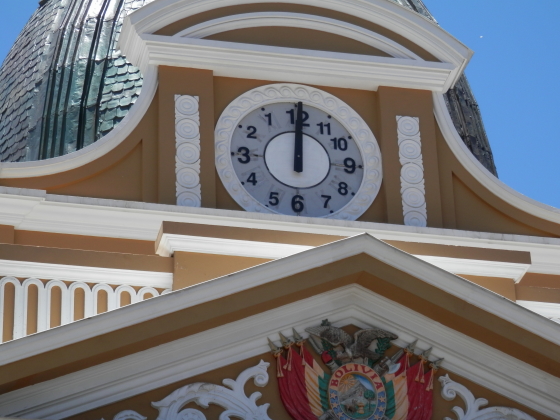 Looks closely at the clock, to notice anything different. 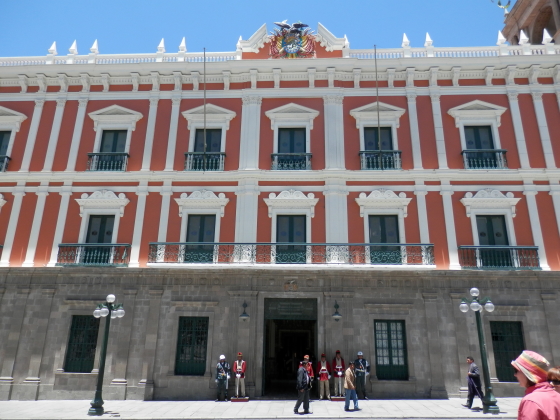 The Presidential Palace, with a guard outside. We got to see the changing of the guard. 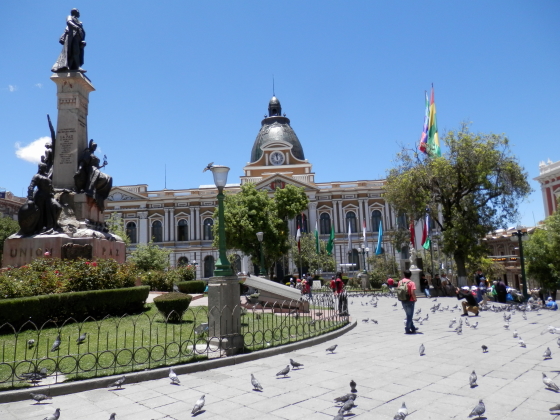 This is the main plaza by Parliament. 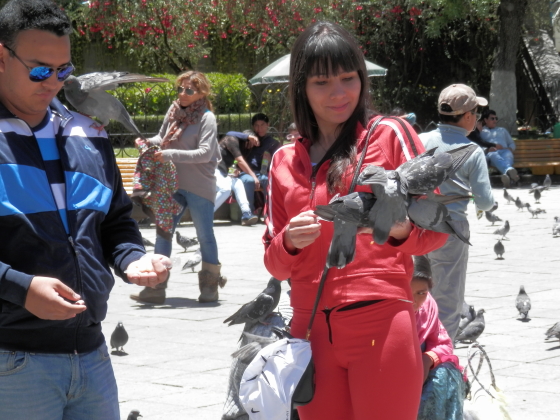 Thousands of pigeons here and if you have food for them, they are not shy. 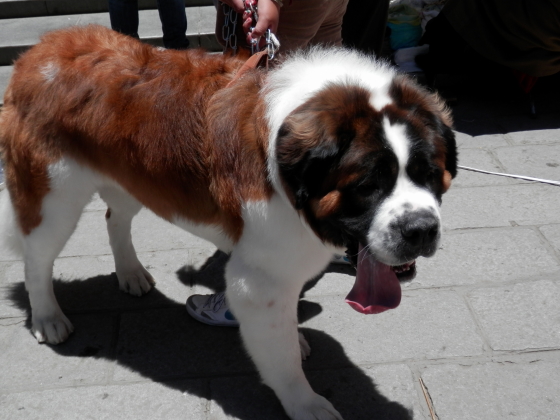 Saw two women (trying to) walk this dog. He is a puppy – only a year old! 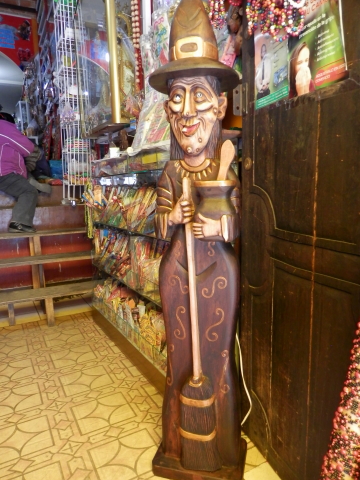 Finally a visit to the Witches’ Market. 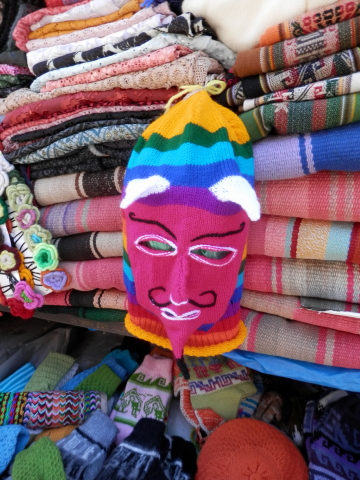 That would be such a cool ski hat! 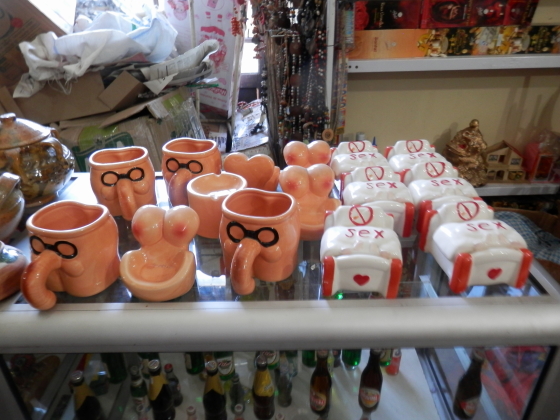 The market had a variety of, umm, interesting artifacts. 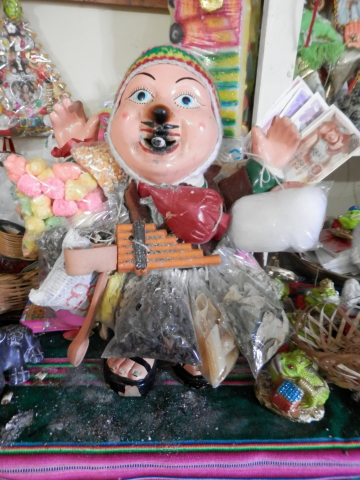 This is the Andean Santa Claus. Love it. 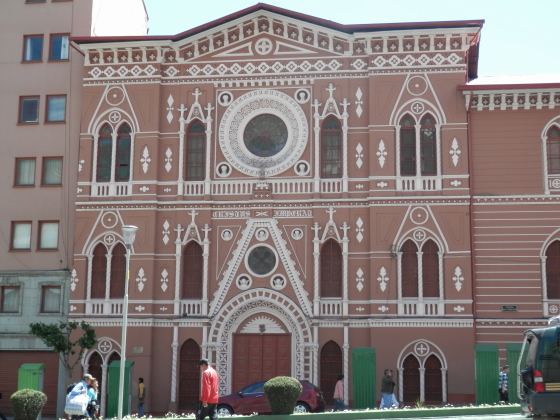 some beautiful architecture on the walk home. 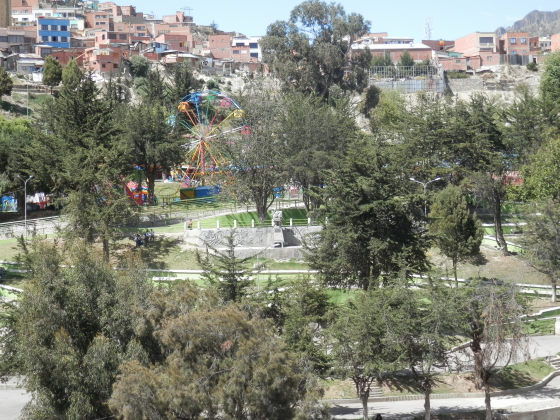 Am amusement fair in the local park. 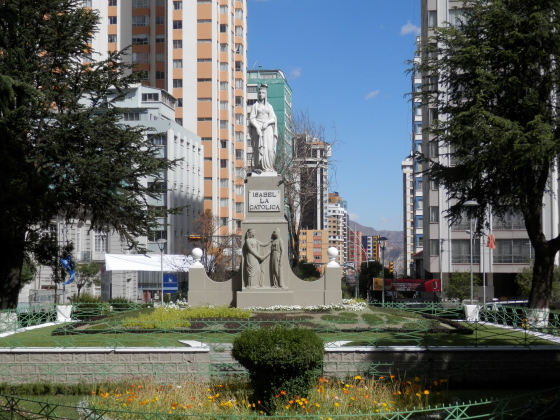 And one of many statues and small parks in La Paz. This is two blocks from our hotel – the Hotel Mitru, which was very good except for the noise from the night club across the road!