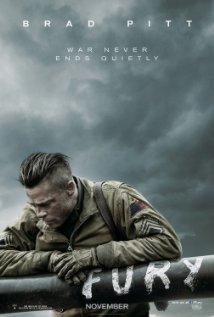 FURY opened on Friday and I went to the premier.  I really enjoyed this movie and give it 9/10 stars. It is directed by David Ayer of Fast and the Furious (2001).

Set in April 1945 as the war is drawing to a close, Bratt Pitt, the Sgt commander of a US A4 Sherman tank crew, has been “killing Germans first in Africa, then in France, now in Germany…It’ll be over soon, but before then Norman, a whole lota more people gotta die.”

The Allies are making their final push towards heartland Germany but encountering dogged resistance every step forward, so the merciless killing escalates. The film actually opens with a txt on black…“In WW II American tank crews were out gunned and out armoured, and suffered greatly at the hands of superior German technology” or words to that effect. Ok, that pretty much sets the scene for us. 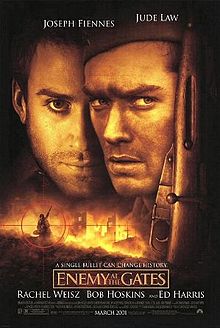 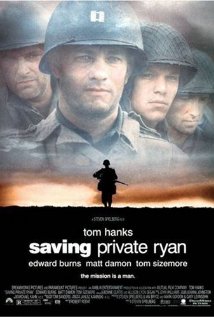 This is a grimier, dirtier, more ghastly portrayal of war, especially tank warfare, than Saving Private Ryan 1998 (Tom Hanks). It’s more in common with Enemy At the Gates 2001 (about Stalingrad with Ed Harris, Jude Law). But it’s a quality addition to the WW II war movie genre. It’s about the traumatised men: their numbness, shock, endurance, and tenacity.

Brad Pitt plays a battle-hardened tank sergeant (Sgt. Don ‘Wardaddy’ Collier) commanding a M4 Sherman tank and her five-man crew (2nd Armoured Division). They are out-numbered, out-gunned, and have a rookie soldier thrust into their platoon who was trained to type 60-word- a-minute.  His first task is to literally scrape the face of his predecessor off the inside wall of “Fury,” the tank, their “home.”  He vomits.  The bucket of cold water just smears the blood everywhere. 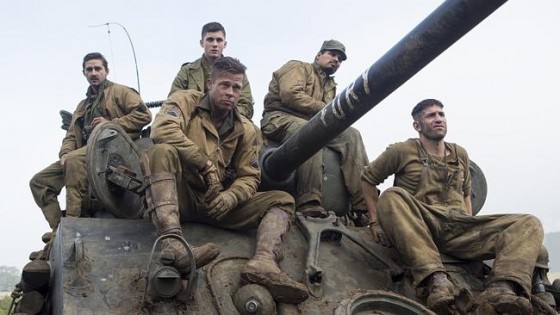 The gunner is a volatile menacing moldy-teethed brute called Grady ‘Coon-Ass’ Travis played by Jon Bernthal, better known to us as Rick’s family friend Shane in Walking Dead 2 whom he was forced to murder at the end of the season.  Then there’s Boyd ‘Bible’ Swan, a weeping, smoking “are you saved” Christian with doe eyes (Shie LaBeouf). Latino Michael Pena plays ‘Gordo’ Garcia the all-important driver, and “Norman” is the rookie assistant driver and machine gun operator who goes to church.

There’s lots of philosophical jostling about war, life and death.  “Boys, God says we can kill ‘em but not screw ‘em!” There is a facetious tank crew motto, “Best job I ever had.” 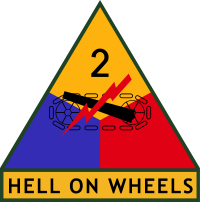 This would be their tank shoulder patch [the 2nd Armoured Div] and you glimpse it occasionally in the movie.

The 2nd Armoured Division crew are advancing with the 66th Armored Regiment in a normal platoon of four tanks. Pitt’s 5-man team is the only crew to have come through together since D-Day.  Pitt has the usual head-holding stress attacks like Cpt John Miller of Private Ryan (Tom Hanks) about losing men, but hides it. But you can see it in his eyes.  Nevertheless he’s ruthless, cynical, hard-bitten, and will do whatever he has to keep himself and his men alive. This includes ‘blooding’ Norman in to shooting a German prisoner in the back.  “It’s you or him…you gonna get me killed Norman?…shoot him.  Do your job.”

There’s no Cpt. Miller letting Germans go in this movie and Pitt rips up the Germans family photos before he’s shot.  This is tough love and the raw morality of the jungle.

Norman resists and, a church goer, tries to hold on to his humanity, but as they pass power poles with children hanging from them and other SS atrocities, this incongruity is evoked.  His ‘humanity’ risks the lives of his crew-members and when he acts too slowly, a tank crew is hit in front of them and a tanker burns to death.  “That’s your fault Norman, that’s on you, you see what you did? Do your job!” They are, lirerally, a killing machine and must not falter.

Some great scenes in this film.  A highlight is their encounter with a much-feared Panzer VI (Tiger I) tank which ambushes their 4 tank platoon and “boils up” three (men roasted alive) while Pitt and “Fury” charge it to get around behind it and pierce the back armour.  Their missiles bounce helplessly off.  It takes composure and nerve while their mates are being blown to literal roasted pieces around them. High stress white knuckle stuff.

This is the best tank duel I’ve seen on screen.  It is fierce, deadly, nerve-wracking and desperate. You get how vulnerable, scared cr**pless the tankers must have been up against a Tiger, and how utterly brave they all were. The American attrition rate was catastrophic. 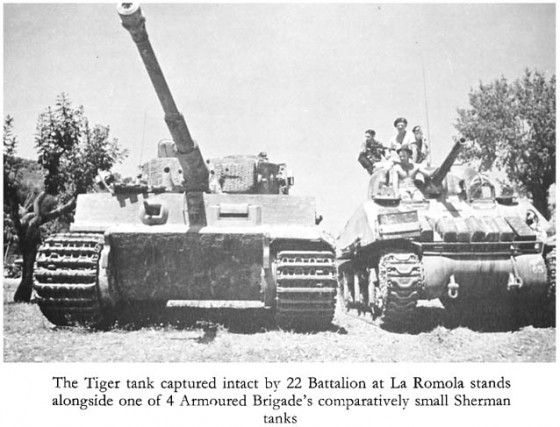 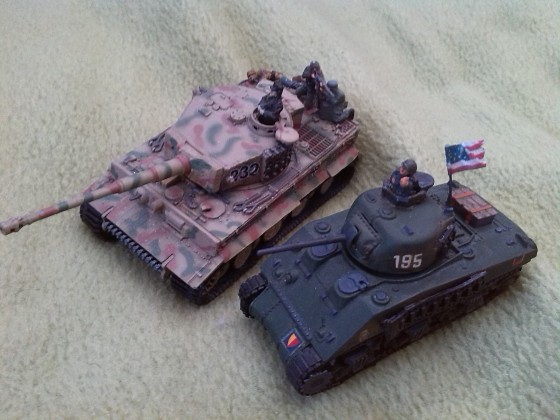 Two of my own 1/72 painted WW II models. I have four 3-tank platoons of Tigers (top) and about 40 Shermans (right); about the right ratio for a fair duel.

The Tiger was actually the first German tank to be captured by the Allies.  There is only one working Tiger left in the world today. Some sobering statistics: it took ultimately several thousand Shermansto wipe out 1500 Tigers (each tank has a crew of 5).  Shermans were a piece of tin against a better-designed, harder-hitting, longer-range metal monster.  It would normally take 4 or 5 Shermans to take out a Tiger, which is why it was feared so much.  The Russians simply mobbed them with T34s.  There are supposed to be no more Tigers left, but Pitt’s platoon is ambushed by one.

I really like how the CGI is done for the armour-piercing rounds.  It’s so violent, so fast, so total in its devastation. Like lasers of death.

Another great scene, is after a battle and the US Army haven take a town.  Pitt and Norman go upstairs and connect with two German civilian women. It is tense with suggested occupier rights to imminent rape, but Pitt intervenes with some eggs he’s found and asks for them to be cooked (women as cooks rather than rape victims). There is some piano playing and singing, a sanctuary of civilisation in this otherwise ghastly hell-hole. Until the other crew-members arrive.

before they arrive, young Norman takes the younger women in the back room (Sgt Collier: “If you don’t take that healthy lookin’ girl in back, I will!”).  When the older German woman tries to intervene, Pitt says forcefully, “Nein!  …They are young, and alive.” (ie, let them be).

But belligerence arrives emphasized by some discordant gorilla bashing on the piano in contrast to Norman’s previous playing by the other tank crew-members as Pitt attempts to preserve this small island of normality centered around the poached eggs. (Sarcastically) “Oo, it must be Norrr-man day.” “You weren’t there in France Norman.  You like horses? It took us three days to shoot all demhorses…the swarms of flies were like fog.”

In this scene we also see that Pitt’s back is completely burned.  However, the war calls, and they have to press on.  It is reminiscent of the little French girl scene and her parents in the sniper incident in Private Ryan. Good people die.

The film comes to an almighty climax, as Pitt’s platoon is ordered to hold a cross roads to stop an unknown German troop getting around the side.  3 of the 4 tanks are knocked out en route by the Tiger, but Fury decides to go anyway and hold the cross roads alone. Their track gets blown off and they are immobilised.  Then a crack SS Panzer Grenadier troop (“maybe 2 or 300 hundred”) with tracked vehicles advances down the road toward them on dusk.

They disguise the tank with a burning German and other debris and set a point blank ambush. All hell breaks loose and it is a sustained and dramatic finale to an excellent movie.

One brickbat (Spoiler). When some Germans finally get two stick grenades inside to finish off a dying sniper-riddled Pitt, they explode. But when Norman crawls back inside through the floor hatch, Pitt is not minced all over the interior of the hull, as he should have been. I deleted one star from 10 for that. I guess Pitt is too pretty for that.

The action is dramatic and riveting.  The characters are solid. I especially liked the interplay between several of them about theology and in the end when Pitt surprisingly quotes Isaiah 6 back at ‘Bible’ Swan.  Like Pitt, I knew the reference, which was gratifying. This recalls Cpt Miller and the secret of his pre-war vocation (English teacher) among his platoon.  Perhaps Pitt was a minister or something before the war and has hidden it to be a killing machine to keep his men alive. It surprises ‘Bible’ Swan. Later he does the same when he’s shot and dying, quoting scripture to Norman. So there is a strong tilt to the redemptive qualities of Christianity in terms of duty, death, and redemption in this movie. This is contextual and valid in the context of WW II American soldiers.

But it is not clean.  Human flesh is squashed indiscernibly into the mud. Heads and limbs get blown off and people rejoice in their killing.  I also appreciated this is not American 100 bad guys shot to every 1 good guy Gun-ho. No, this is more realistic. Americans are out-gunned. They die.  No nationalist propaganda here, just the cruel hard, soul-destroying realities of tank warfare in the mud of 1945 German fields and towns with Tigers prowling around.

Some great lines in the movie:

Some visuals I enjoyed: the grimey mud and subdued palette of the film without drawing too much attention to itself; the small round tanker rock climber helmets they wear, which are a bit dorky, but utilitarian and for me, juxtapose the heroic male coolness factor. Just men doing the hard stuff.  I liked the look.

I totally recommend this film, especially for the blokes. To conclude, I can’t leave you without this commentary and the Tiger fight scene (spoiler).