Typical shopping plaza in South Korea (Incheon) that at night transforms to a Times Square-type neon tapestry. And some more of that modern architecture I mentioned. 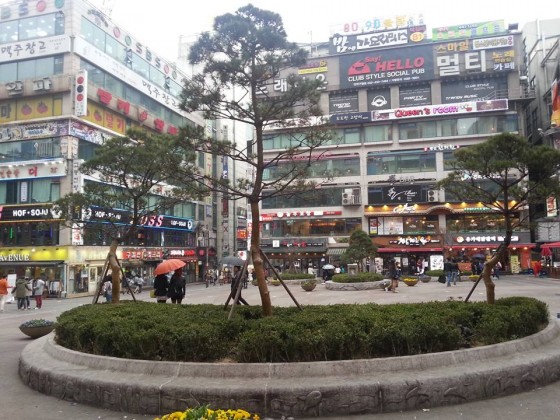 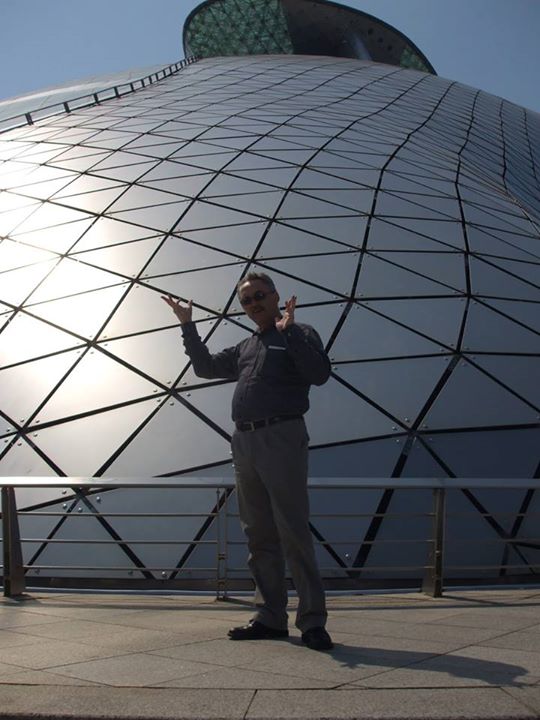 Back to the JSA.  So, this is where the two Korean borders converge inside the DMZ. The Joint Security Area is the only portion of the Korean Demilitarized Zone where South and North Korean forces stand face-to-face and ‘share’ an enclosed area that straddles both countries. For this reason it is often called the “Truce Village” by the media and the military or as I call it the Standoff OK Corral. 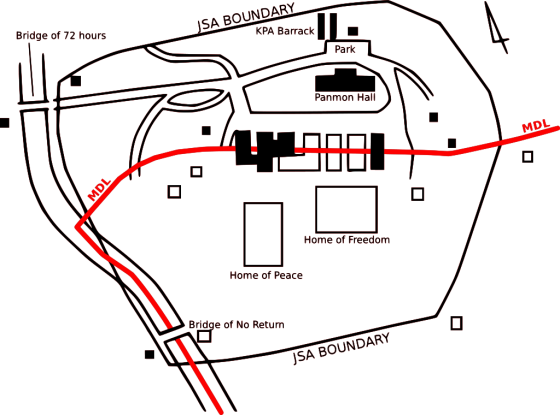 North Korea is above the red MDL line (Military Demarcation Line) which transects the blue conference rooms. The House of Freedomis the main gathering building for South tourists with the curved roof (photo below) across which is the Panmon Hall or Tongilgak I think it is also called. Behind that is a North barracks which is why this area is so tense.  It could be overrun quite easily, which would essentially cause a war.  Note that there are lots of access roads on the North side up to the MDL, but hardly any on the South, which identifies the respective intents.

The MDL line is demarcated by a series of white 1m high wooden posts set at 10m intervals so that the boundary is unequivocal.  The post line extends between the blue conference rooms as a concrete sill, which you can see in the photos. Inside those buildings, the space becomes ‘shared’ but the north half is seen as North Korean, etc.

The JSA is used by the two Koreas for diplomatic meetings and, until March 1991, was also the site of military negotiations between North Korea and the United Nations Command (UNC). Troops and even past Koreans leaders have actually met here, to agree terms, set boundaries and protocols.  For example, North & South Korean troops met and mingled while inspecting open casket repatriations of UN troops in 1993.  In the conference rooms, the respective parties meet turn and turn about (ie they have turns to call a meeting) to discuss minor armistice violations, various admin., and the Olympics. There are two representatives of the Chinese army present.  Only the senior officer of the calling side speaks.  A statement is read first in Korean, then English, then Chinese.  These meetings are extremely formal, often hostile and always unfriendly.  There are no mutual greetings or handshakes.

I asked why some of the South side soldiers stand half obscured behind the buildings.  This is to present only half a target in case of a sudden attack, ie at least two soldiers might remain to defend the MDL.  This indicates how hazardous this duty is. 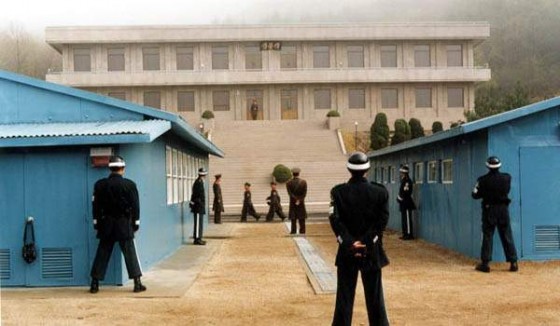 In this photo is the North Korean Tongilgak white building at the back. Note in this older photo it has only two stories. The concrete ‘post’ sill runs left to right immediately behind the brown soft hat North Korean with his back to us. 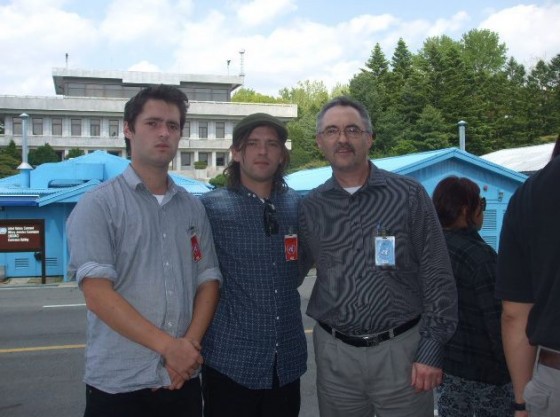 In our photo 2014 you can see the North Koreans have added a third story, apparently a recreation room. But it is hardly ever used, sitting there simply to be higher than the South Korean Freedom House (see below).

The blue buildings are conference rooms and management rooms where officials from both sides can meet.  For example, the two security forces for the JSA meet in the blue building to the right to discuss tensions and incidents in an attempt to diffuse issues.  Despite being very formal and not friendly, it seems to work.  The blue building to the left is the conference room and we move single file in to here under strict behaviour instructions and with an armed guard.  The 38th parallel goes right through this building and even the central table, so half is North Korea.  There is a door on their side that is locked from the outside.  South Korea has a door on their side, also locked from the outside.  At agreed periods, each side can bring their tourists in to this conference room where a number of high level meetings have taken place, but never together.

Note the number of windows, 3 for each side and one in the middle which is neutral. If you were to escape to either side, this is the place and there have been attempts. There was a gunfight when a man fled from the North side over to South Korea.  He dropped into a sunken garden area (before the current complexes were built) and there was a gun fight. 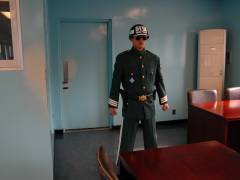 The door to North Korea. The ROK soldier stands guard on the North Korean side of the room, during their allocated inhabitation period.

Inside the conference room, which is bright sky blue, are mahogany tables and chairs.  Its quite cramped and only really for conferences, rather than tourists cramming in.  But its fascinating being in here and standing ‘over the line’ on the North Korean side.

This obscenity actually explains a lot about North Korea.  For them, much of the division is about their mana.  They want everything equal and even minor imbalances are seen as threatening their fragile sense of nationhood (ala the Axe Murder Incident, more later) or cultural self esteem.

Take North Korea’s big white Tongilgak/Panmon Hall behind.  It used to be only two levels, but when the JSA nations put some communications stuff on their roof, which made it slightly higher, well the North Koreans immediately built that whole third floor, simply to be “higher” than South Korea.

Below is what the view is from the North side.  You can see the communications installations covered over by the curved roof, Freedom House.  You stand between the two central pillars and then move into one of the buildings in front on the right hand side. 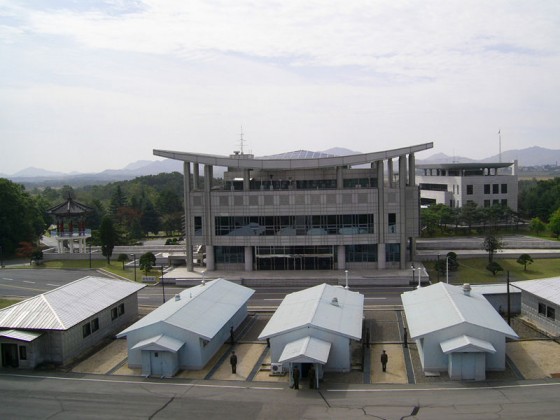 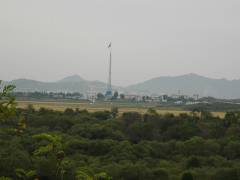 Leaving the Standoff OK Corral we take a short bus ride around the rest of Punganuk and pass a North Korean town a short distance away that can be glimpsed through the trees. This is Daeseong–dong. The West has a large flag pole at the JSA, so the North Koreans came in and built this massive obscene flagpole and hung a gigantic flag from the top at Dong, to be “bigger” than South Korea.  In both cases, the West has not responded tit for tat, content to allow the North Koreans to feel they are ‘superior’ by peeing higher up the wall. You can see it quite clearly through the trees, a forbidden zone, untouchable fruit, with its hideous flag fluttering above them.

I can’t help but think about Orwell’s 1984, and what life must be like for people living in this rather run down grimy village so close to the liberty and freedoms of the West.  If only they knew.  I suspect only the most “politically correct” people (with family hostages elsewhere) are allowed to farm here.

As we drive around this area, we are strictly forbidden to take photos of towers and aerial installations, etc. The whole visit is very sobering and you can sense the tension. Then we come to the spot where some tree pruning became violent and fatal.

Next time: The Axe Murder Incident.