The change in rankings is shown below. 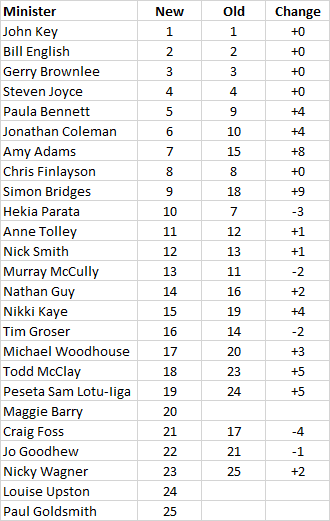 So Adams and Bridges are the big movers up. Bennett and Coleman also move to the front bench, meaning four new front benchers. This is great – National needs to rejuvenate to maintain support, and Key has shown significant caucus and cabinet rejuvenation, at a time where Labour has stagnated. Kaye, Woodhouse, McClay and Lotu-Iiga also move up the ranks, with the former two moving into Cabinet.

Craig Foss remains a Minister, but outside Cabinet. And Chester Borrows leave the ministry, but is likely to become Deputy Speaker.

Some of the significant portfolio changes:

It is an elegant reshuffle with some ministers keeping their main portfolios, but a lot of change. Helen Clark in her third term left rejuvenation far too late. It is good to see the PM determined not to make the same mistake.