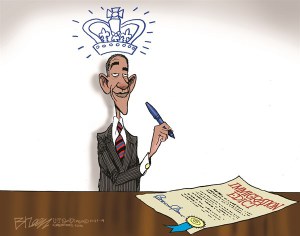 The gum-chewing celebrity stand-in for President is under serious threat as, in breaking news 5/12 NZ time (Associated Press and Fox), the US Congress – the real power behind the ‘throne’ – has just voted down Obama’s Executive Order immigration initiative to vote amnesty to five million illegal immigrants. (Incidentally, Obama won his second term by about five million votes; so this might be viewed by some as a cynical Democrat ‘buy-up’ of an electoral buffer [ten million people] against the other side, a bit like the electoral implications of Sir Robert Muldoon’s universal superannuation initiative, that it could be argued significantly expanded the National party voter base). 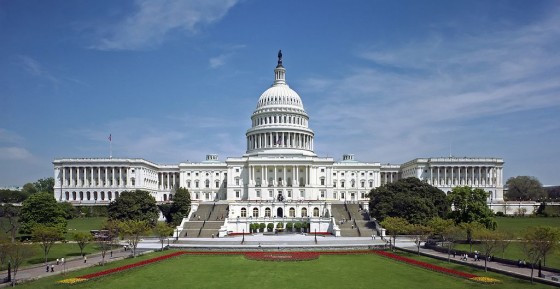 Capitol Hill (or “The Hill”) that houses the US Senate (right) and the House of Representatives (“the House”) (left) sometimes also referred to (confusingly) as “the Congress.”

The bicameral US Congress (House of Representatives & Senate) is the real power in America, among several checks and balances.  They vote the money and a president must have their support to go to war (remember all that pressure from Churchill to Roosevelt to enter WWII, and Roosevelt needing to navigate Congressional sentiment and feeling and using them as his effective UK filibuster?).

Presidents Reagan and Bush both used Executive Orders, but to enact already passed laws; Lincoln used the rare power under emergency in time of civil war.  Obama has used it simply to circumvent the democratic process in America to get what he wants, a policy he cannot get sufficient votes for in the House. Obama has ‘made law’ on the hoof without reference to, indeed in the face of direct opposition from, the democratically elected political representatives.  He has done this by appealing to some ‘higher morality’ for the ‘righteousness’ of his party political and factional ideology, the pathological arrogance of a lot of Left political thinking. That is an anti-democratic outrage.

Back in Democracy-land (Govt of the People by the People) the elected House voted 219-197 to declare Obama’s immigration actions “null and void and without legal effect.”   Obama himself described his own potential action as “unlawful” before doing it. 22 times he said that but he’s weasel-worded a 180 degree ‘switch-a-rooney’ to now say it’s ok; brought in his lawyers. So, government by selective lawyers. At first the ‘constitutional professor’ (Obama) said it would be illegal and unconstitutional to take the action he now has, but has since ‘learned’ how wider the powers of the President actually are.  Gee, how convenient. Government by research and autocracy. No wonder he’s attracting the epithets “Emperor” and “King.” 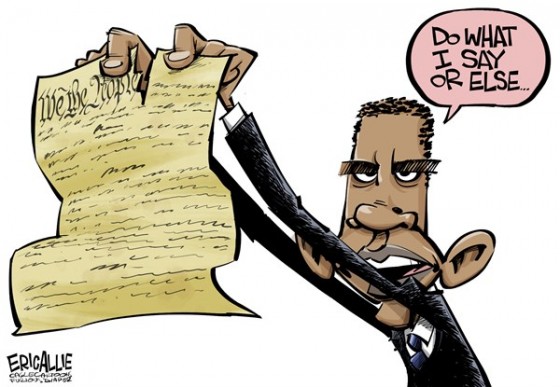 So, this is no longer about Immigration, but the Constitution and Democracy.  Like gun laws, you don’t fight Americans on C and D.  Obama will lose and his ‘presidency’ may unravel. But it gets more serious than that, because this stand-off is potentially tied to the Budget.  The Constitutional debt ceiling (already historically lifted by Obama amidst acrimonious factional debate and stonewalling) expires on 11 Dec. 2014. Current government funding will expire. The House will be disinclined to give the President his way.  It could potentially be a bleak Christmas for government workers. 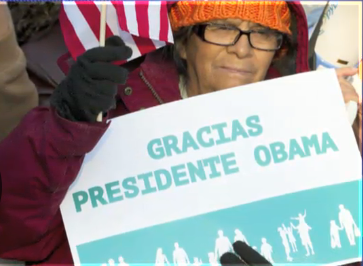 Moreover, 17 States led by Texas have voted independently to sue the President over the Constitutional legalities of what he is doing (see the States list at the bottom of this post).  That is serious disunity in the Union.  Remember, the breakup of the Union and civil war occurred previously over political policy disagreements (slavery, property rights, State autonomy vs Federal authority, transference, among other complex issues).

A severe issue is the political mismanagement of this.  Obama seems oblivious to the budgetary and political consequences of his immigration autocracy, and that implications would inevitably flow like falling dominoes for contravening the Constitution and slapping Congress in the face. Did he not understand that of course the majority Republican House would want to leverage the Budget issues against his unprecedented contempt over immigration policy?  Wakeup Mr President; do you not understand how politics works?

The 113th Senate must also pass this House “null and void” bill (and may not); the White House has already said it will veto the House bill (to block the immigration initiative).  So, this is war.

The difficulty for many Republicans, is the backwash against them if they stonewall the government flow of money, as it hits many Americans in the pocket (government workers).  So, short-term pain for long-term Constitutional and Democracy principal and politics? It’s a risk. Some Repub.s want to delay the Immigration fight until 2015 (when there will be both a Republican House and Republican Senate majority).  Makes sense.

[Note: Despite the recent 2014 mid-term elections during the 113th Congress which gave the Republicans a majority in both wings of Congress, the 114th Congress does not ‘meet’ in Washington DC until 3 January 2015. Until then, the 113th Congress continues, a bit like our Parliaments, until they are sworn in. (Recall the constitutional crisis over currency devaluation between the outgoing Muldoon administration and the incoming Lange 4th Labour government? [the 40th-41st NZ parliaments]).

My pick is the House bill will not get Senate support, but it will sound a warning to the Obama presidency that will galvanise the 17 States pursuing legal suits against him over the Constitution.  Then in early 2015, the Republicans will rally and engage their President in an almighty Constitutional scrap (Senate & House) over their system of government. It will be a challenge for the 2016 presidential runners, and surely, will play trump cards to the Republican nominees, presenting hustings themes of the highest order to American minds (Constitution, Democracy, Federal Power, Monarchy vs Presidents,  etc. You can hear the booming stump speeches already). Hillary Clinton, if selected, will be drowned out in the greater debate.