Most of the cartoons from the US have been about the  New England Patriots and the “deflate-gate scandal” or Obama’s state of the union (SOTU) speech. This weeks cartoon is about the latter.

The illusion to the President as Robin Hood refers to his idea of taxing the rich to give to the middle class. It was amusing to observe John Boehner sitting through most of the speech with look of a man who thought he was being fed rotten fish and was trying to hide the fact. 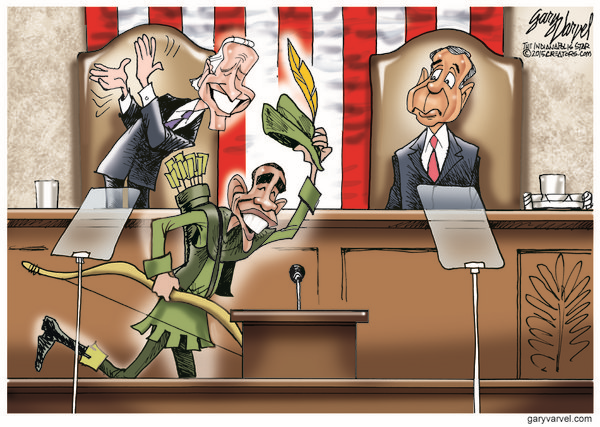 Sadly the SOTU has become a spectacle that is nothing more than a campaign stop for the White House incumbent. It has been like this for a number of years. The Economist has an op-ed on the SOTU and reminds readers that in an earlier time for example under Nixon the speech was an effective way for the President to attempt to advance policy goals and start an intelligent policy debate on issues of the day.

For a bit of context, it is useful to revisit the reception of old state of the union addresses. I’ve been watching and reading a few by Richard Nixon who, as a Republican president from 1969 to 1974, faced some similar hurdles: an endless and dispiriting war; a mysterious and haunting foreign foe; a sluggish economy; a Congress dominated by the opposing party. Interestingly, Nixon’s speeches promoted some similar priorities.

The result was progress.

But in fact many of his ideas became policy, even with Democrats controlling the House and Senate. The new Congress that had just been sworn in that January 1971 could have found it useful to make Nixon look like a failure, with a presidential election ostensibly lurking around the corner (though two years back then were far longer in politics than they are now). But in fact they passed a lot of landmark legislation that continues to benefit Americans today.

The article ends with these words.

One can’t help but feel wistful for an era when a president’s ideas might’ve been debated on their merits, and when lawmakers took their job of making law seriously. It has become hard to remember a time when truculence wasn’t the surest route to political power, and when policies weren’t simply dismissed as “partisan” before being thrown away.