There have been two topics this week that have kept the US cartoonists occupied. One is terrorism and those Charlie Hebdo cartoons. The other has been the US 2016 presidential election. With Mitt Romney making noises again about standing for the third time he has been on the receiving end more than once.

The first cartoon shows Romney as a Chameleon. 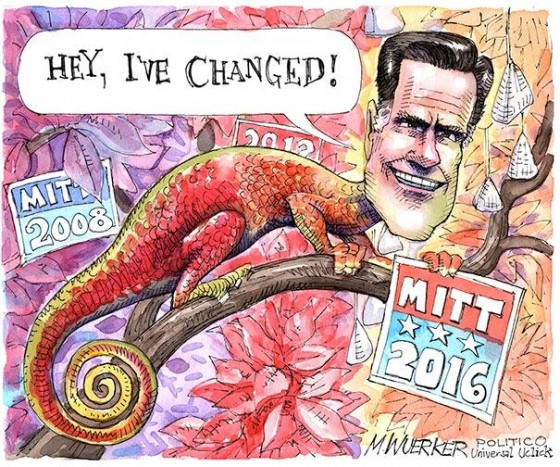 The second by Lisa Benson has the GOP and Democrats playing cards. 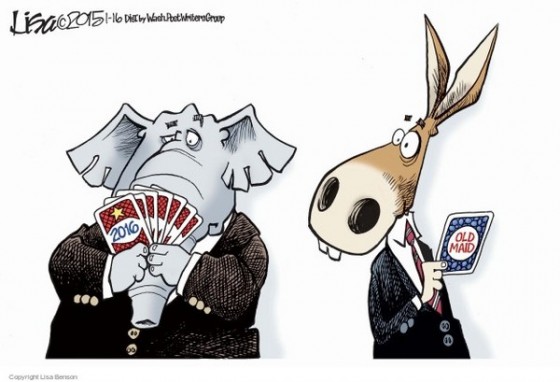 Both Romney and Clinton have the same problem which is they have been around for a long time so no matter what they’ve achieved they’re both big targets when opponents indulge in the inevitable negative campaigning. Kerry in  2004, McCain 2008 and Romney in 2012 all suffered from this problem.

Neither should be discounted though as both could be formidable. Hillary may not have a lot of competition in the Democratic primaries which would mean she won’t put under too much pressure prior to the general election which may also reveal she isn’t ‘match fit’ when the actual campaign arrives in 2016. As for Romney, he had his chance in 2012 and couldn’t get the job done so his time may have past.

My guess is that the GOP will go for a candidate who has experience at Gubernatorial level and who hasn’t been around forever like both Hillary and Mitt.