The Remuneration Authority has announced the new salaries for MPs, backdated to July 2014.

A key para is:

In 2014, the Authority’s payline at the level for ordinary members increased by 3.3%. For this year, the personal benefit of the travel entitlement to members and their families has been assessed at $3,200 per member, a reduction in the amount assessed in previous years, which takes into account tightened provisions around the personal use of travel by family members. Taking into account the change in value of the travel entitlement, this produces a package increase of 3.56% and a salary increase for ordinary members of 5.5%.

So a 3.6% increase. All pay rises for MPs are unpopular but with inflation at below 1% this one will be more so.

The MPs only have themselves to blame though. On multiple occasions I have submitted that the law should be changed so that the Remuneration Authority sets salaries for an entire parliamentary term, rather than annually. There is no need for annual adjustments in a low inflation environment. They should be set three months before each election and apply for the whole term.

Maybe the backlash to this increase, will finally see a change. I don’t begrudge MPs getting well remunerated for what can be very tough roles. But they go through a needless annual round of pain and vitriol by having annual increases. 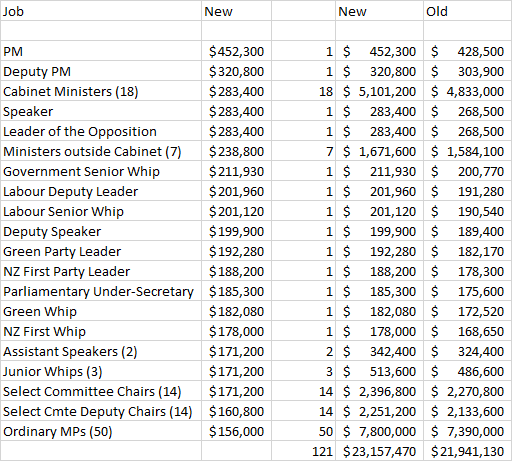 This shows the new salaries for each type of MP, and the increase in total salaries which is $1.22 million more.

Of interest is the Labour Deputy Leader and Senior Whip get paid more than the Green and NZ First party leaders.