The Government’s latest report card for the public service shows an increase in the number of children and young people being assaulted – a trend that Labour describes as “dreadful”.

One of National’s 10 targets for the public service was to reduce the number of children being abused by 5 per cent, to approximately 3000 children, before 2017.

An update released this week showed that 3144 children were physically abused in the year to March, compared to 3111 the previous year.

When the target was set three years ago, the rate of physical assaults on young people was increasing and was projected to rise to around 4000 by 2017.

State Services Minister Paula Bennett said this increasing trend had been “successfully flattened”, though she admitted more needed to be done to hit the target.

“Those are dreadful figures, yet police stats tell us the situation could be even worse than that, with the number of violent assaults on children up 3.5 per cent to a record 5397 offences in 2014.”

First of all any level of child abuse is too high, and everyone wants it to trend down. But before we call a 1% increase “dreadful” let’s look at what has happened here over the past decade. 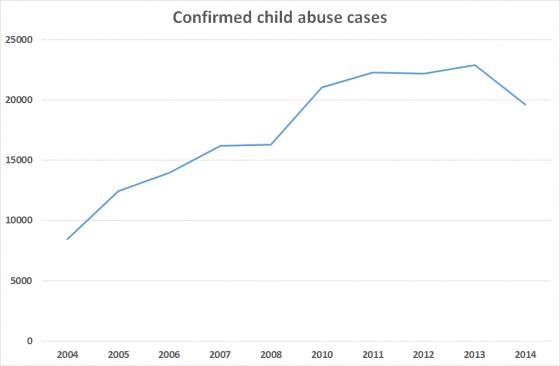 So my definition of dreadful is the 93% increase under the last four years of Labour. That is what failure looks like. Not a 1% increase, but a 93% increase.