Do we blame the Government for deaths at home, or just those at work?

This is not to say that some work place deaths are not preventable, and that sometimes the employer is responsible. That is why we have prosecutions. In some industries such as forestry the death toll has been horrendously high.

But what I reject is the notion that every death is preventable and is the fault of the Government or the employer.

So what does ACC tell us on fatal accidents. 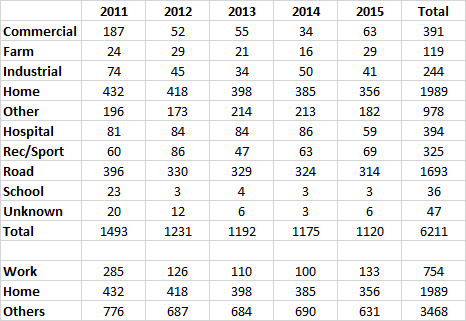 These are for 30 June years. So over the last five years only 12% of fatal accidents have occurred in work places. 32% have occurred at home and the rest on the roads, sports fields hospitals and other places.

Also of interest is the total number of fatal accident claims has actually fallen since 2010/11.

Do we know what proportion of the workplace accidents, involved employer culpability? In some accidents there are definitely things the employer could have done to have a safer workplace. But in others, it might be procedures were not followed, or just sheer bad luck (you slip etc).

Our workplace accidents rates are higher than many other countries and need to be lower. But that doesn’t mean all workplace fatalities are the fault of the employer or due to the nature of our OSH regime. Men are 20 times more likely to die in workplace accidents than women. Is this all due to what occupations they are in, or a reflection that men are often less risk averse (with bad results).  Changing male culture around risk may be just as important as workplace safety regulations.