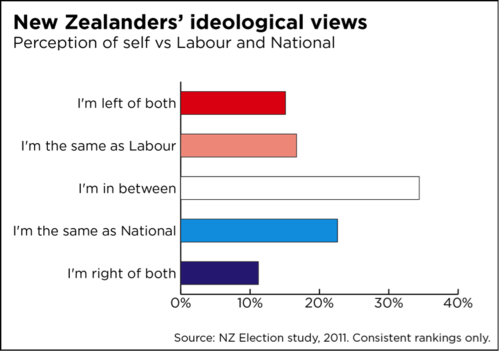 And if you win a majority of centrists, you win. The New Zealand Election Study series records six MMP elections in New Zealand – the three where Labour did best among centrists were the three Labour won.

You don’t need to be a genius to work out where you need to go to make 50%.

Michael Foot and Neil Kinnock lead the UK Labour party through seventeen years of Tory rule. It was bleak. Why did they keep losing for so long? Because under Foot the hard left got to run Labour’s policy, alienating Labour from the middle ground. And under Kinnock the hard left continued to battle prominently for policy influence, allowing Labours’ opponents to scaremonger successfully about what a vote for Labour really means.

How did UK Labour break out of this funk? Tony Blair.

And if you think that lesson, of declining centre-left fortunes when its narrative swings left, doesn’t apply for in modern New Zealand, here are two phrases you may find familiar: “Man ban.” “Sorry for being a man.”

I look forward to Rob being denounced as a neo-liberal Blairite!