In April I published my inaugural data looking at the opinion of editorials and columnists at the two major media sites of Stuff and NZ Herald.

Six months has passed since then, and I can now publish an update. This will allow us to see both what the sentiment has been, but also has it changed from the six months previously.

Again some notes on the data: 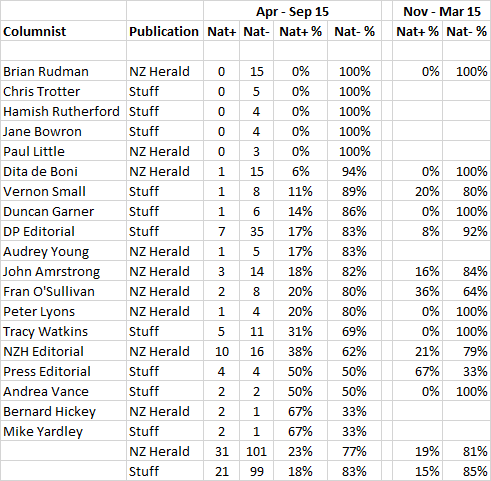 Turning first to the editorials of the three metro newspapers (only they were included), the Dominion Post is the most relentlessly critical of National. Of 42 editorials referencing the Government or National, 35 are critical and only 7 supportive, so 83% negative.  I’ve also noticed a trend that the Dominion Post editorials have become something more akin to a left wing blog, than a more reflective editorial. Time and time again I’ve noticed the author never loses an opportunity to take a dig at the Government, stating opinion as fact. They are very very different in tone to the other newspaper editorials, even when they may both be criticising the Government.

The Herald is 62% negative and 38% positive.  This is less critical than the previous six months when it was 79% negative.

Turning to the columnists, the one who has written the most critical of National is Brian Rudman with 15 negative and no positives. Chris Trotter, Hamish Rutherford, Jane Bowron and Paul Little have also been all negatives – but have written far fewer columns.

Compared to the previous six months, the coverage has been slightly less negative, with the Herald dropping from 81% to 77% and Stuff from 85% to 83%.

Some left wing blogs insist that the media (and especially the Herald) is pro-National and too soft on it. In terms of editorials and opinion columns, it simply isn’t true. 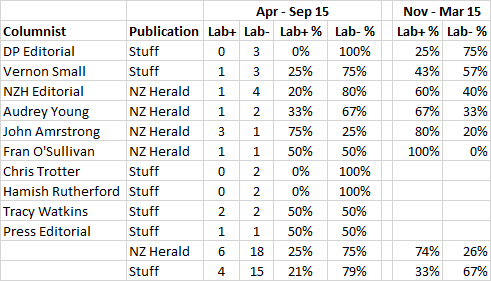 Turning to coverage of Labour there has been a significant change from the last six months. Up until March, 74% of Herald columns and editorials on Labour were positive, but in the last six months only 25% have been. Likewise Stuff has gone from 33% positive to 21% positive.

The only columnist who has been more positive than negative on Labour has been John Armstrong.

And NZ First has had the most positive coverage with five positive and three negative from the Herald. Ironic as they complain the most the media is biased against them.  With Stuff they have had two positive and no negative.