A very moving story from the Melbourne Age.

The two scientists relished life. They skied, went bushwalking and climbed mountains, often taking their three young daughters with them. Their cultural and intellectual pursuits were many – classical music, opera, literature, wine, arguments over dinner with their many friends. They donated 10 per cent of their annual income to political and environmental movements. Family events were spent thoroughly debating the topics of the day.

As their capacity declined, the conversation about ending their own lives became more serious and their rejection of what Peter called “religious do-gooders” became more fierce.

“It was also a way into their favourite topics; philosophy, ethics, politics, the law…,” says their youngest daughter, Kate. “The idea that their end-of-life decisions could be interfered with by people with the superstitions of medieval inquisitors astounded them, and alarmed them.” …

They set a date. Peter said it was time and Pat agreed. They would enter the “big sleep” together on October 27, the day after Pat’s 87th birthday.

Anny got on a plane. When she arrived in Melbourne on October 21, she was shocked at how frail her parents looked. She would often find her father slumped in his chair. Her mother was struggling to move in the purposeful way she used to. Anny showed them a DVD of concerts she had performed with the Munich Radio Orchestra. But she could see that her parents had changed. They were tired. Even a bit bored, she thought.

On their final night together, the family shared a last supper of sorts. The sisters prepared a plate of cheeses, avocado and smoked salmon to eat with wine. Peter and Pat pecked at it. They didn’t seem very interested in food. Anny picked up their grandmother’s violin and played for her parents. They went to bed around 10pm.

The next morning, Peter and Pat got up early. They showered, dressed and made their bed. Peter had breakfast, a fried egg and coffee. Pat did not eat. She wanted to keep her stomach empty for what was to come.

The family sat in their backyard in the soft morning sun, enjoying the native garden that had flourished around their Robin Boyd-style home. Peter had designed the house himself in the 1960s.

“They were more cheerful than I had seen them since I arrived,” Anny said.

Everybody knew the plan. The sisters were to leave around noon. They felt they had no choice. Assisting, aiding or abetting a suicide carries a penalty of up to five years’ jail in Victoria. Their mother would have liked them to stay, but not at the risk of prosecution.

Pat did not want to die by herself, so she would take a lethal drug first. After leaving her in their bed, Peter would walk alone down the hall of their home and into the living room where they had shared so many hours. He would open the back door and trek one last time through his yard and into his shed where his equipment was set up.

Wouldn’t it have been simpler if they could have had their loved ones present when they chose to go?

Somewhere in Antarctica, there is a mountain named after Peter Shaw. He conquered it in 1955 on a pioneering mission with the Australian National Antarctic Research Expeditions.

The following year, he was awarded a Polar Medal for the mission and he was immortalised on a postage stamp. The trip had been tough. He and his companions had endured at least one terrifying storm that was so traumatic no one ever spoke about it again. They relied on candles for light and layers of wool for warmth. There were no fancy gadgets.

The year that Peter stuck an Australian flag in that peak was the same year he fell in love with his sweetheart.

Patricia was the “it girl” in their mountaineering club. Dazzling blue eyes and blonde hair. But Pat – or Patsy as she was sometimes called – was more comfortable in shorts and hiking boots than dresses and baby-doll heels. She was whip smart, too. Had plenty to say and knew what she was talking about.

The first time Peter ever saw Pat, he later told the girls, he had turned to a friend at the club gathering and asked who she was. The attraction was mutual. They married when they were 27.

Now their daughters waited on the beach. Their greatest fear was not that their beloved parents would die, but that they – or worse, one of them – would not.

The Shaw sisters trusted their parents and had faith in their plan but they were still aware of the many things that could go wrong.

What if the drug their mother had buried in her garden for fear of a police raid had lost its potency? What if one of them survived to be accused of killing the other?

There is no good way to lose your parents. When the three sisters returned to their parents’ house, they were orphans. The plan had worked and there was no sign of suffering. Peter and Pat had set out to end their lives in a meticulous, scientific fashion without any fuss, just as they had lived. And they had done it.

Quality of life can be as important as quantity. 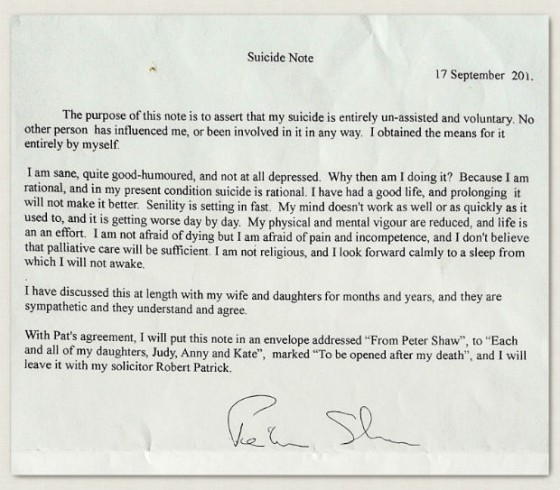 Peter and Pat should have been able to do what they did, without the need for secrecy, and with tightly regulated procedures for assistance.