Every election a major study/poll is done by the academics involved in the NZ Election Study. They’ve started to release data from their 2014 study and there is a trove of interesting data, which all parties should be looking at (if they want to increase their vote).

The first set of data I want to look at is party favourability. Respondents were asked to assess how much they like each party on a 0 to 10 scale. So a 0 to 4 is unfavourable and a 6 to 10 is favourable.

So how many people had a favourable opinion of each party? This is an important measurement as it effectively shows the current maximum likely support for each party. If you don’t like a party, there’s no way you’ll vote for it. If they do like the party, they may vote for it. 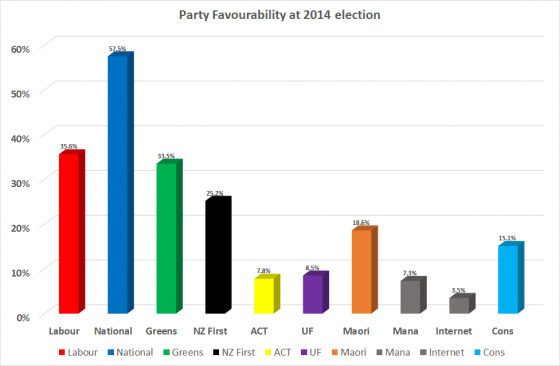 National is viewed favourably by 58% of NZers. That helps explain why 47% voted for them.

Labour is viewed favourably by just 35% of NZers. This is very significant as unless they can fundamentally change the brand and image of their party, that is their effective lid.  And as they really need to get into the high 30s to be able to form a clear centre-left Government. So they have a favourability rating lower than the minimum they need to win.

The Greens are also viewed favourably by around a third of NZers. This is possibly the same third who view Labour favourably, which suggests Greens could get more votes off them. We won’t know for sure how much they overlap until NZES release the full data set.

I was fascinated that 15% had a favourable view of the Conservative Party. If things hadn’t fallen apart after the election, this indicates they had definite potential to break the 5% barrier. Also of interest is the Maori Party have 19% who view them favourably – suggesting again they could pick up more votes.

ACT and United Future both have less than 10% seeing them favourably. The change of leader of ACT may have changed that, but regardless a real challenge.

Now we turn to the Unfavourability – how many NZers say they don’t like that party. 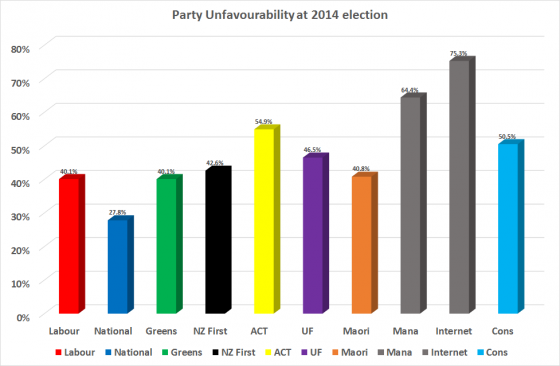 At the other extreme the Internet and Mana parties were massively disliked and toxic. The thought of them deciding the Government was a turn off for many voters.

ACT have the next highest unfavourability at 55%. Not a big surprise with the Banks prosecution.  Also on 50% are the Conservatives.

All the other parties are in the 40s for Unfavourability.

Now we look at the net favourability – those who like less those who dislike. 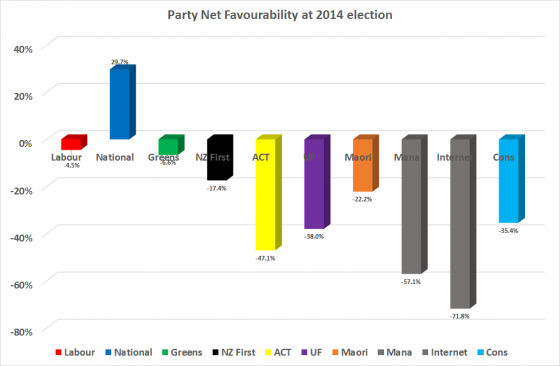 Only one party has positive net favourability – National at +30%.

Labour and Greens are both slightly negative net favourability at -5% and -7%.  Following them is NZ First on -17%, and Maori Party -22%.

Overall the data shows the huge gulf between National and other parties when it comes to both favourability and unfavourability.