Another question asked in the 2014 Election Study was where voters say each party on a 0 to 10 scale where 0 is hard left and 10 is hard right. They were also asked where they assessed themselves. 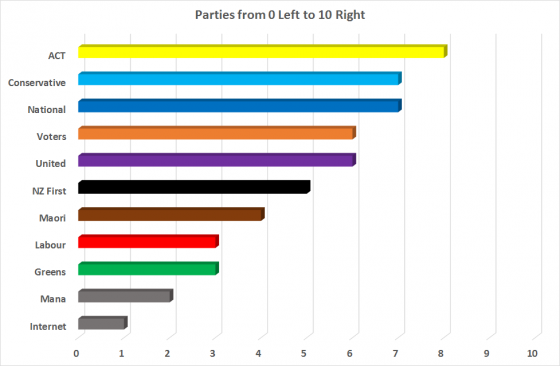 The median voter score was a 6 – so slightly centre-right. United Future was placed there also.

NZ First is in the middle on 5. The Maori Party slightly centre-left on a 4.

The Mana and Internet parties were judged to be hard left.

I find it interesting that Labour and the Greens both have a median of 3. Once upon a time the Greens would have been seen as more to the left of Labour, but now they are seen as not far apart.

As the median voter is a six, then a three is as far away from them as a nine is.

For Labour to win, they either need to shift the median voter from a six to a five (very difficult to do) or they need to shift the perception of themselves from a three to a four. I doubt they will, and they will be surprised when they fail again.