South Korea may seem an unusual pick for a role model, but researchers want policymakers to follow the Asian nation lead to better protect Kiwi kids from junk food.

As the ink dries on the Auckland University team’s study revealing the extent of unhealthy food choices outside the school gate, they urge a closer look at South Korea’s “green food zones”, which ban sales of unhealthy foods to children within 200m of schools.

Lead researcher Dr Stefanie Vandevijvere says the Special Act on Children’s Dietary Life Safety Management relies on a list of unhealthy foods and drinks that cannot be sold or advertised to children.

She wants New Zealand lawmakers to allow councils to limit new convenience stores and fast-food and takeaway outlets near schools after her group found a large majority have an unhealthy-food shop within 800m of their school.

They found 68.5% of schools have a dairy or fast food outlet within 800 metres of the school.

800 metres is a pretty long distance. Are they saying that is a problem?

Why stop at banning dairies near schools? Even worse there are some dairies near homes where children live. Maybe we should ban dairies from being within 200 metres of a child’s house also! 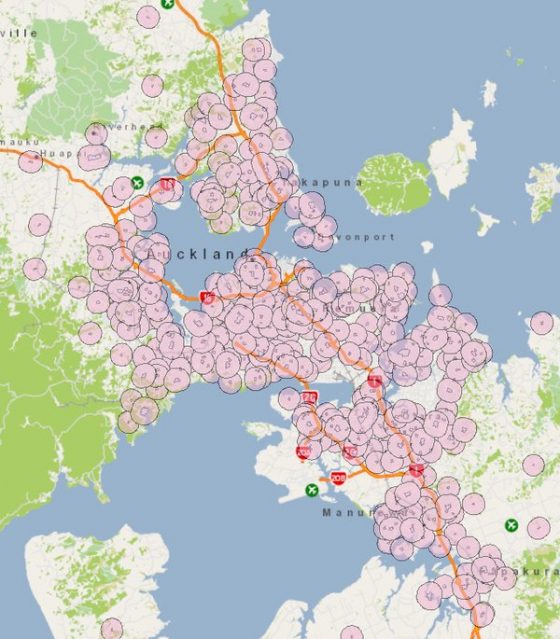 This map by Stephen Davis (HT Stats Chat) shows how almost all of Auckland is within 800 metres of a school. So basically the research is uselsss. I suspect it was of course funded by the taxpayer.