6:1. Well we did find out that Jon Snow IS REALLY DEAD so that is the demise of a major core character although I still predict he will be “resurrected” as an ice hoard zombie. 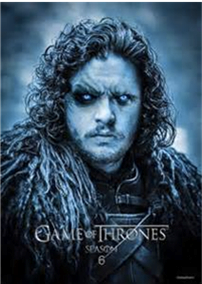 (Update 26/4: Gee I might be right helped by this season 6 promo meme of Jonny Snow as – wait for it – well a White Walker!  Told ya!)
The big surprise in 6:1 [SPOILER} is that the sexy red witch is REALLY a wizened ancient old crone witch (icky she’s been having magic sex with all and sundry but is obviously under a doppelgänger spell “Look I’m young and perky-breasted!“). That was very cool. Loved her lumpy back bone spine pushing through pasty white skin: this is a great plot-line twist to the story so far. She backed the wrong royal horse in Stannis Baratheon who is now meat on the snows of the North!
I like that His Annoying Arrogant Wannabee Regicide Stannis Baratheon is dead and his army massacred in the snow by the Boltons of the North (House Bolton of the Dreadfort the ruling house of the North whose banner is a flayed man crucified upside down on a cross after Roose Bolton’s quip “In my family we say: A naked man has few secrets; a flayed man, none.” Charming. (K GoT not for the faint-hearted).
There are so many characters in this epic that it is good to excise a few and with Stannis gone well that really cuts out the Baratheon pretenders to the throne as a family line (the Stag’s Head sigil?)  And who better than to end his sorry ‘royal’ days rather royally than [SPOILER}  Brienne of Tarth!  Excellent.  Her knightly execution of Stannis Baratheon was appropriate (but note: we did not ACTUALLY see  her blade sever his nasty Pretenders head – so like so many – is he REALLY despatched?)

Meanwhile in ‘Persian Ottoman’ Dorne: “weak men will no longer rule Dawn!” meaning not “weak” but “men” and this is set to become a realm of treacherous plotting Amazonians (cue GoT skimpy attire and more lesbian love scenes – which we could all do without thanks) resplendent with Keisha Castle-Hugh’s sisters and their phallic warrior weapons (with lots of B&D leather to keep that community transfixed). 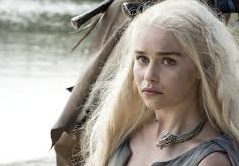 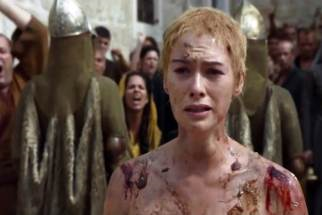 The gut-wrenching pathos and full frontal male and female nudity of Queen Cirsei Lanister’s “Walk of Shame” (S5) with that tolling nun bell was great if a not too gratuitous for TV. But now with the murder of her ‘nice’ daughter by the harpies of Dorne (fathered by incest with her twin brother) and the introduction of her 8-foot high Gimp with the swollen bruised face (like something out of Mordor) is Circe set to become an embittered betrayed raging Fury?  I think thee so!  A great counterpart to Daenrys Targarean. Girl Fight!

Arya Stark (‘Needle’ lost in a Stark stack) is very cool as one of the trainee Faceless Gods With No Name Helter Skelter groupees. 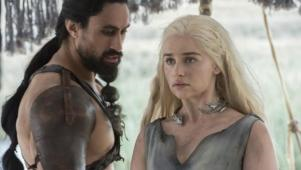 Daenrys meanwhile has wandered off like Little Red Riding Hood again and been kidnapped for raw horse sex with her ex-in-laws the plains Dothraki (yawn; that is an aside we could do without; they should have advanced her destiny plot directly towards the West with her dragons in tow breathing rage and fire. Daenrys is the rightful heir to the Iron Throne so get on with it! She has been denigrated mid-S 5 into 6:1 in to a little girl with her episodes becoming a season of Lost (with her literally lost).
But this may be a twist to unite the Dothraki again with her Eastern slave cities and the Dragons to take on everyone else for the Iron Throne.  Fire v Ice.
It also creates space for Tyrion Lannister (“who always pays his debts”) and one of my favourite Machiavellian characters the bad and ball-less Varys to take over and govern Daenery’s abandoned latest city on her behalf. At last a ‘crown’ for Tyrion.
The Men of the Nights Watch?  Meh. Bunch of manly wimps dressed in furs who are much better in the books and a bit undercooked in the TV series. But hopefully they will unite with The Wildings (now on their side of the wall thanks to the ‘traitor’ Jon Snow) with their cool Snow Giants and fight the White Walkers as the latter give them the “Winter Is Coming” cold shoulder.

Prediction: Jon Snow will unite the Walkers’ Ice Zombie army of Undead with The Wildings and the Nights Watch and House Bolton against Targarean.

The revival of House Stark from near oblivion is a great story arch and a central vein in GoT. Nice to see ‘Reek’ (Theon Greyjoy) redeemed and paired with cuzzy Sansa Stark and Brienne of Tarth. The convergence of the three Stark children together (and is Tyrion really a Lannister or a Stark? What was Sean Bean really up to all those cold nights at Kings Landing as the Kings Hand?) is an inevitable and obvious plot path – but is anything ‘envitable’ in GoT?

Oh and we’re all awaiting the terrible and gruesome death of that really really nasty psycho Ramsay. He’s even worse than Joffrey Lannister so Ramsay’s demise is an anticipation probably coming sometime season 6 we would all hope. he has to kill dad first though. Like Tyrion did.  If there is incest we need some paricide too!

Prediction: Watch for the three Stark children to be re-united with Jon Snow (now dead) and Tyrion; to revive House Stark perhaps with The Wildings and the Men of the Night Watch and the White Walkers in an epic confrontation between Deanerys Taragraen’s dragons and fire empires plus the Dothraki in an almighty Tolkien-esque Battle of the Pelennor Fields.

Prediction2:  Will the love sicj knight errant XYZ gradually turning in to a Stone Man touch daenerys and turn her to stone like those extinct Dragon fossils beneath the crypts of King’s Landing?  I think so

It’s great: I can’t get enough

Below right: Cousins Sansa Stark and Theon Greyjoy (‘Reek’) of Winterfell and the Iron Halls- two branches of the family House Stark re-united (the execution of Sean Bean as Lord Stark season 1 has still not been avenged; or the massacre of his entire family at the treacherous Red Wedding).  I’m rather glad to see ‘Reek’ redeemed; that story arch was pretty ugly and dark (the torture scenes and the psycho mind games reducing a human being to a humiliated shell of humanity – ick: GoT really pushes the envelope). Almost too much. 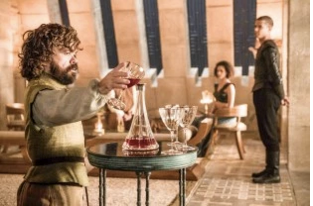 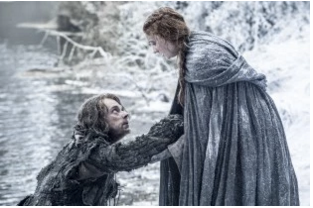 Probably got lots wrong (it’s so complex and myriad-epic) so jump in with corrections and your own predictions.