6:2. So this week we waited to learn if Jon Snow was really dead…and waited to see if he was really alive. The Red Witch (star of the final scene of 6:1 – no spoiler; go watch that) tries to revive his very dead corpse but failed. But watch the Dire Wolf’s eyes under the table. Red Witch is disillusioned; her gods have failed her with false visions (or have they?)  “F**K em all then!” (Lord Davos). 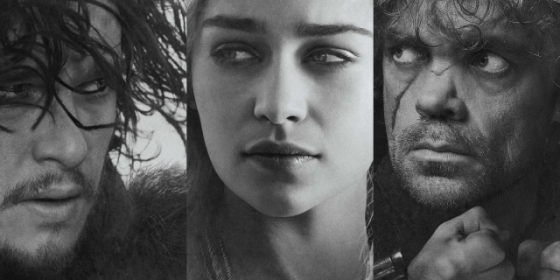 Review: GoT 6:2 (The Dwarf gets his dragon-on) | coNZervative
[Spoiler] Meanwhile Ramsay’s adopted dad has had a son (his first true born) and second heir which to Ramsay the Bastard means only one thing; Adopted-Daddy-o needs a knife in the nethers and Ramsay of course doesn’t hesitate. He also dispatches his new brother and his wet nurse to a rather grisly nasty end – Ramsay is being set up as a nastier bit of work than Joffrey Baratheon/Lannister.  Oh come back Theon and wreck your terrible ‘Reek’ vengeance!
[Actually the ‘wet nurse’ is Lord Bolton’s wife and Ramsay’s step-mum (Ramsay is really a ‘Snow’); but this seems unlikely in the episode: Bolton simply chose this woman as her father offered a dowry of her weight in gold – so Lord Bolton took her: she seems like the baby’s wet nurse to me in this episode].
[Spoiler] Meanwhile in the Iron Islands another father and House lord is despatched in this game of epic musical thrones. Balon Greyjoy as the Lord of House Greyjoy of Pyke – not to be confused with Lord Walder Frey who is Lord of the Crossing and mastermined the infamous Red Wedding (referred to in Obama’s White House Correspondent’s dinner) they both have long straggly white hair – goes out on a swing bridge in a storm. That can mean only one thing in GoT!
Funnily enough I was watching an episode of MythBusters just before in which Jamie (not Lannister) and the beret Walrus build a 100 foot long rope bridge out of duct tape and attempt to cross it.

Balon walks out on to the rope bridge in the rain and dark only to meet his brother and a show down. Without a spoiler let’s just say the rightful heir Theon (‘Reek’)  Greyjoy now has some room to move and a kingdom to inherit and sort out (now there is some vengeance that could sort the psycho Ramsay!)  Who else? That showdown is VERY personal. This may help kinda (flowcharts are necessary when watching GoT)… 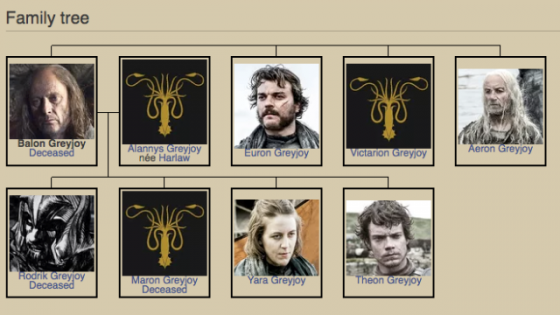 Tyrion and Varys are still setting about re-establishing order in ‘Dragon town’ since Daenrys flew away.  Tyrion does something incredibly brave but foresightful: he goes in to the dark dungeon where the dragons are chained and tells them a wee story and unchains them (how come my trailer chain and ‘D’ ring is never that easy to unshackle? Even with Dragon drool all over it?).
Tyrion sets them free so they can fly out and ‘forage’ (ie burn up insignificant rural hamlets like Bulls and eat their BBq-ed people and -well- bulls). In doing so Tyrion is now ‘Friend of the dragons’ and maybe setting himself up as a consort to Daenrys? OR are we seeing a  transfer of power from Daenrys to Tyrion and Daenrys will end up Dothraki horse-shag?  Interesting. You read it here first! You can never underestimate the Dwarf!
The Wildings take the Wall back. (“The Wildings” as flogged from Tolkien’s Dunlendings or Wildmen of Dunland also wrapped in fur skins as the Dothraki are pinched as the Roharrim but with a cross-breeding of Southron Haradrim). It’s not epic-fantasy without generous helpings of Prof Tolk.)  There’s a great scene where a BlackWatchman shoots one of the Frost Giants in the neck with a crossbow bolt and gets “splatched” against a concrete bulwark and tossed across the snow leaving a crimson ribbon like the line of a red marker.
There’s another similar scene where Cersei’s Giant Knight bashes the head of a disrespectful village man against a brick wall while he’s relieving himself: quick efficient and bloody and a taste of the efficient desptaching of all Cersei’s enemies by this hulking Hulk Hogan in armour known as “The Mountain.”

I’ve always found the men of the Black Watch a bunch of wimps so an all round massacre by the bearded WWF Norseman in pelts would not be remiss. But effectively they are now a combined fighting host of the North and can meet the hordes of Dothraki migrating West; under Jon Snow if he ever resurrects perhaps joinde by House Stark and Theon Greyjoy etc.

Arya Stark is accepted as Girl with No Name among the Faceless Gods Helter Skelter cult but I’m sure is still Arya Stark inside (maybe she’ll even find Needle again and do some more family dynasty utu-ing). Speaking of which two Kiwis star in this series: Keisha Castle-Hughes in Dorne and Joe Naufaahu (runs an Auckland gym) amongst the Dothraki. Once Were Warriors! 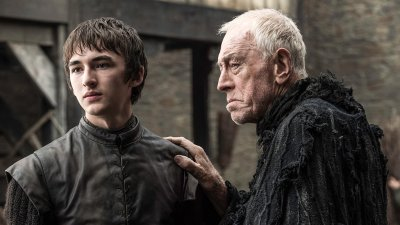 Some backstory to Hodor arrives via a vision of the past while Bran Stark and Co (kind of Hobbits on a walk about) are wrapped in to that weird memory tree. Tree huggers with the Three-eyed Raven played by the famous Max von Sydow (who usually plays a WWII German General). This is cool; a kind of future and past wandering Internet service where they can see the past and future and make decisions for the present.  Bran played by Issac H-Wright has had an adolescent growth spurt and is now a young man; he was a small child in Season 5. Bran is still crippled but how will Hodor carry him about on his back now? Might look a bit gay (the actor who plays Hodor actually announced he was gay; who cares?). When Bran is eventually united with Sansa and Arya Stark (a holy Trinity?) as the House Stark they’ll be like super-powered X-Men or Mighty Morphing Power Rangers.

Cersei Lannister is recovering from her Walk of Shame and Inquisition but faces down the Red Keep guard with her Giant house gimp with the bruised face (who is this person? Is it the Hound returned?). Cersei is reconciled to her soft insignificant ‘king’ son the ring-in Joffrey Baratheon/Lannister II (I can’t even remember his name. He’s like some guy from Spot On). But the script appears to set him and Cersei Lannister up as a despicable Mum + Son vengeance troupe ala Alexander the Great and Olympias or Nero and Agrippina-the-Younger.

Episode 6:2 pretty much a forward development of all the story strands: but the end of two lines: 1) House Bolton (Father and second heir first-born after dastardly deeds done dirt cheap by the bastard Ramsay) and 2) the brother-cide of Balon Greyjoy setting up a murderous uncle for ‘Reek’ to go and sort out (to Sansa Stark – “Can I borrow one of the horses?“).

So House Bolton destroys Stennis Baratheon’s pretensions (and his army) only to disintegrate internally via Court regicide? Awesome! Go the Bastards!

Prediction: Theon will obviously return to the Iron Islands; unite that empire with Winterfell and the other people of the North around Jon Snow and House Stark for the epic showdown with Daenerys and Tyrion et al that – like Winter – you can tell is coming! With bells on – or maybe fox pelts.