A very good article by Nevil Gibson in the NBR:

Yet this radical resurgence must have some basis in real conditions and this is supplied from an unexpected source – the establishment media and its antipathy to the National-led government.

While the left has plenty of internal divisions about its priorities and strategies, it thrives on persuading its sympathisers in the media that some issues can gain traction.

These are collectively known as identity issues and Dr Edwards has produced a fine set of graphs on his blog to make the point. He has tracked media coverage of certain “radical” terms over the terms of the six Labour and National governments since 2000.

These terms will be recognised by NBR readers, who may also wonder why they have become more familiar in recent years. They comprise inequality, poverty, gender, feminism, identity politics, capitalism, race/racism, political correctness, ethnicity and working class and Marxism.

Two of these are illustrated in the graphs and they provide an astonishing answer. Media interest started to rise dramatically after the election of the National government on the cusp of the GFC in November 2008.

From 2001-09, the New Zealand Herald had an average of just 38 articles a year on inequality. But two years later it had jumped nearly four times that amount and is now 420 a year or eight times a week.

And here is the graph of it: 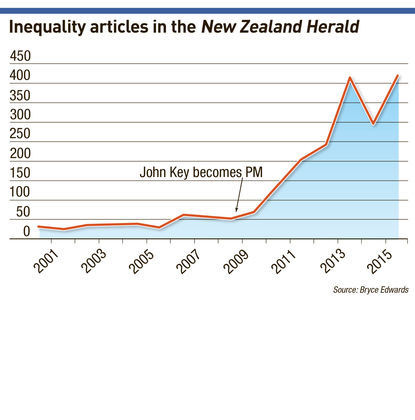 Now no matter what indicator you use, the data all shows that inequality has not increased in any significant way since 2008. In fact has been constant most of the last 20 years.

Yet you get this almost 1000% increase in reporting on it, just because of the change of Government.