An American student who flew to New Zealand at her own expense to work for a scheme associated with the Labour Party says things did not seem right from the get-go – but she says the party is not at fault.

I can’t believe the media are reporting this as credible. This was not a scheme associated with Labour. It was a Labour scheme. 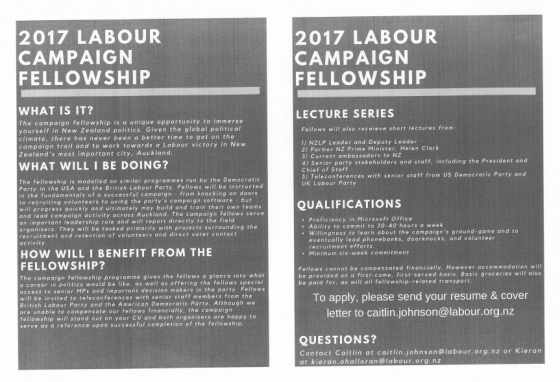 It is call a Labour campaign fellowship. It was run by two Labour Party staff members and applications for it went to the Labour staff.

The scheme, whose failure caused party leader Andrew Little to apologise on Thursday, was accused of using the students as “slave labour”.

Emily Dunne, 21, was one of 85 interns from across the world expecting lectures from Helen Clark and real world campaign experience.

The political science student from Virginia said the campaign had almost nothing to do with the Labour Party, and instead she blamed the organisers.

The organisers were the Labour Party. Look at who were named in the bFM interview:

I am probably the one who knows the most about the situation for certain reasons and I would just say that it is not the Labour Party’s fault. It is Matt McCarten, Paul Chalmers, Simon Mitchell, Caitlin Johnson, Kieran O’Halloran. They kind of organised on their own, lied to the Labour Party, went off and said they were bringing over 15 Americans to work on campaigns, and really tried to bring over 115 at peak capacity

I’m sorry but this is crap. Newshub has reported that documents show they were budgeted for 100 students. It was never intended to be just 15.

And the five people named are all Labour Party.

To argue this scheme was independent of Labour when it was called a Labour fellowship, and run by staff from the Leader’s Office and Labour field offices, plus a member of Labour’s National Council is beyond credibility.

And here is the final proof: 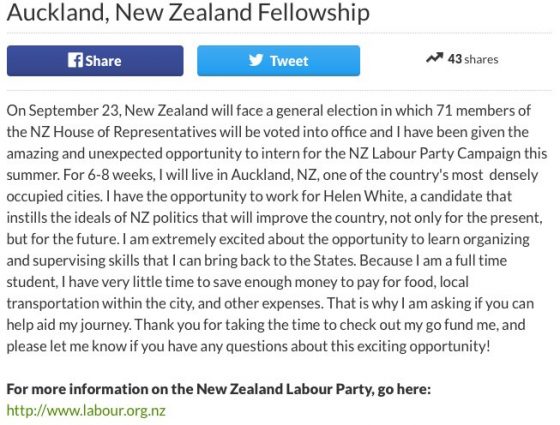 This is one of the Labour fellows talking about how they will be working for Labour’s Auckland Central candidate Helen White.

This was not some independent effort. The Campaign for Change is a front organisation for Labour, run by Labour Party staff and office holders.