Stuff have done a useful article looking at the policy of each party with regards to the status of cannabis for both personal and medical use.

I’ve summarised this in the table below: 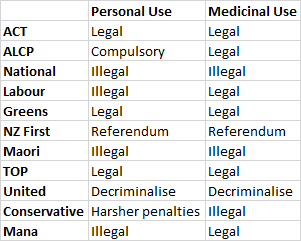 These are based on the substance of their policies. So the parties that are totally prohibitionist are National and Maori Party. The total legalisation ones are Greens, TOP, ALCP and basically ACT (no official policy but their sole MP is in favour). The others are a mixture.