Rawiri David Wereta is a second striker.  According to the last High Court Judge who sentenced him in 2017, Wereta is currently serving a set of sentences totalling about 21 years for repeated serious violences.  His second strike offence was for wounding with intent to cause grievous bodily harm, committed on a fellow prisoner, for which he received a sentence of 6 years 9 months imprisonment.  He committed his second strike offences while in prison serving his first strikes sentences.

His latest sentence was for assault with a weapon after attacking another prisoner with a 30-40cm long ‘shank’ – prison slang for an improvised, sharpened weapon. After he nearly killed the prisoner by stabbing him 18 times, he did a shirtless victory parade of the cell block. Am sure he’ll respond well to rehabilitation eh. 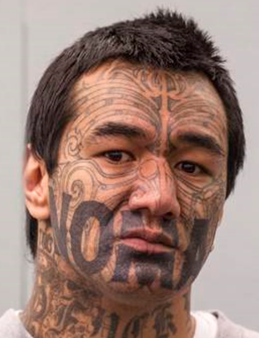 His first strike offence was for the aggravated robbery of a suburban dairy, which he committed with his brother.  They attacked not just the employee on duty but also based a person outside the store into unconsciousness. For that, and other offending, he received a sentence of 10 years 6 months imprisonment.  Aggravated robberies of dairies can have devastating consequences for the victims. Apart from the obvious violence suffered, the psychological impact is often huge, and financially can be crippling on people often barely able to eke out a living from running their dairy, working long hours, 7 days a week.  When sentenced for this offending in 2013, the court had to have 13 police and security officers in court to ensure Wereta and his brother, who was also being sentenced, behaved themselves.  Both were heavily manacled for the sentencing.

Wereta has at least 68 criminal convictions stretching back to 1997.  He is or has been a member of Black Power and the Nomads gangs.  The judiciary considered imposing Preventive Detention on Wereta in 2014, but failed to do so.  Three strikes prevents him being released early by the Parole Board as he must serve his entire second strike sentences without eligibility for parole.

Prime Minister Jacinda Ardern and Justice Minister Andrew Little want the Parole Board to be able to let him out early to continue his violent offending in the community, rather than in the confines of prison.

Under Three Strikes, Wereta will remain in prison, ineligible for parole, until 2028.