Day 1 on the dig was very heavy work as we restored site to last season’s condition after ‘over wintering. In Israel, trees and weeds grow prolifically. A tree in the middle of the site was cut to a stump in 2017 and on arrival this season was well over 10 feet high with vicious hooked thorns on it sharper than anything in NZ and several inches across. These thorns stick as well as ACT politicians do to Dancing with the Stars.

All winter growth has to be removed so the site is back to 2017 condition. A huge Bedouin-style shade tent is erected over the entire site to shade the archaeologists while digging. Work would be impossible without this. The shade tent is erected with large PVC poles which are sturdy but light and anchored with metal stringers and ropes. Only after all this is done, can excavation begin. It takes a whole day to tidy and prepare the worked archaeological site. Day 1 is usually the hardest as there is no shade and lots of grubbing to do. It is utterly exhausting. Below left you can see the site after it has been cleaned all day by 50 people. The tent shade is raised and lowered every day, as is the shaded communal food eating area.  All metal tools are removed from the site and transported away at the end of each day. So there is a lot of daily pack-up and pack-down.  Note the tree stump, centre. The pylon in the background is part of a large nearby electricity station often targeted by Palestinian incendiary devices. 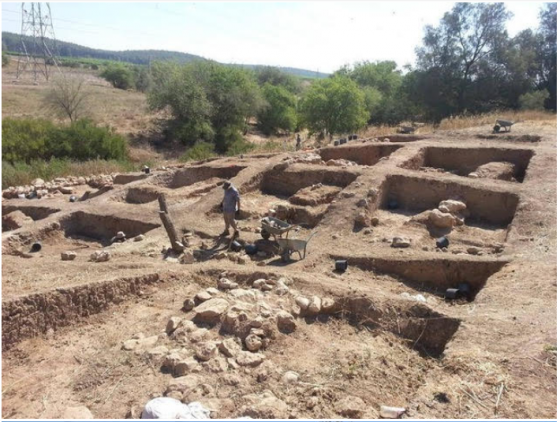 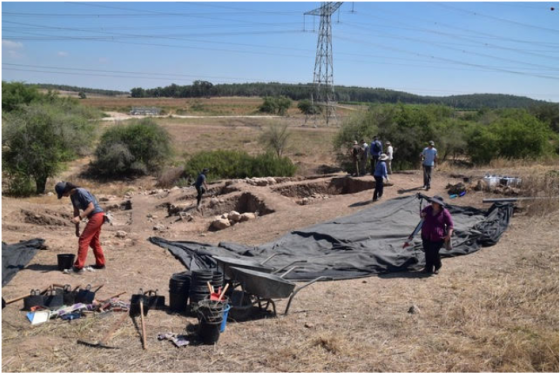 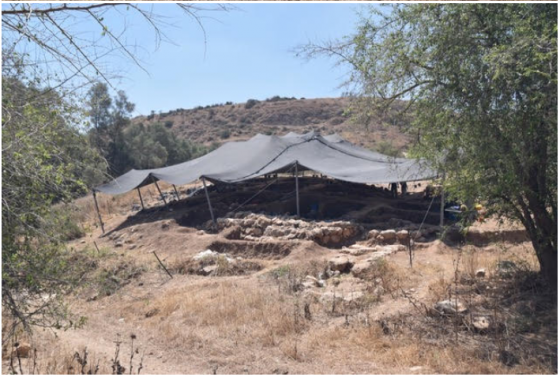 Gath (pronounced “Gat”) has been excavated since 1996. The director of the dig is Israeli archaeologist Dr. Aren Maeir of Bar-Ilan University, Tel Aviv, a world expert on the Philistines. The site manager for him this year is Dr Jeff Chadwick. Gath is located in the Shephelah of the Judean high country and sits astride the main copper trade route west-east into Jordan. The topography West to East is: The Mediterarnean Sea, the Plain (where the Philistines dominated), the low foothills of the Shephelah (Sh’Fay-lah) where Gath is situated on the last main spur, and the high country of Israel behind.  The Philistines came in to Canaan from the sea as “The Sea Peoples;” the ancient Hebrews from the east via the Jordan. Gath dominates the Elah valley, a major west-east corridor.

In 2018 the crew are domiciled in a residential school at Kibbutz Menahem which is only 7 minutes’ drive from the Tell. This enables us an extra 30 minutes archaeology a day than was possible last year, as we are much closer. It’s very basic for a residential school (well below NZ standards) but does the trick. The kibbutz provides us with very healthy kosher communal meals every day. We are residing dorm-style 4 or 5 to a room with our own shower and loo per unit, which is very nice and is heavily used. Everyone is so dogged-tired each day, luxuries are not missed.

Below: The school at the kibbutz Menahem and a Philistine weather vane at the top of the Tell. 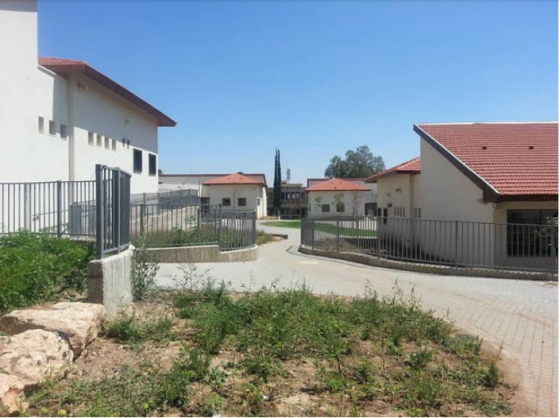 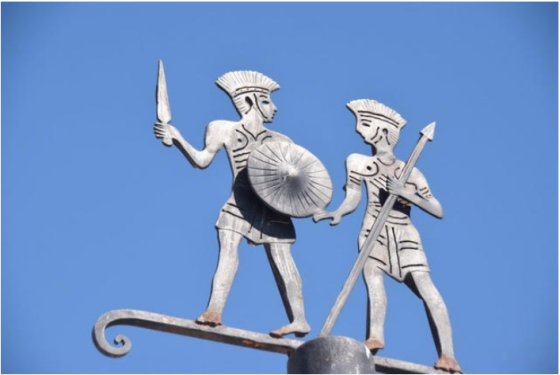 Up at ‘Sparrow Fart’

Each day starts at 5am. We excavate till 9am when we break for breakfast onsite under a shade canopy we erected at 5am. This is fresh vegetables, yoghurts, fruit, coffee/tea, buns, and rice mixes, hard boiled eggs and cheese. We start early as this gives us several of the cooler hours to get work done. It becomes very hot very quickly. We leave the site at 1pm, pack down, and head back to the kibbutz for pottery washing and then ‘pottery reading’ and other lab duties. There is lunch, followed by lectures and then dinner at 7pm.  It’s a full long day but very gratifying and engaging. I attend every lecture my body allows and find these fascinating: the Sea Peoples, Archaeology 101, ancient Semitic languages, Iron-Age metallurgy, archeo-biology, Canaanite religions.

On Day 1, however, after the site is cleared and cleaned and the shade tents erected, we are guided to the top of Tell-es-Safi (Gath) by Professor Maeir as we are all too tired to excavate which begins properly on day 2. Aren explains the 360° view and the history of the site as well as previous excavation areas up on the Tell. This spans Chalcolithic habitation right through to modern Arab settlement up to 1948 when the village was abandoned and later deconstructed as part of the National Park. But it is the transition from the Bronze Age to the Iron Age (1200-1100BC) that brings us all here. 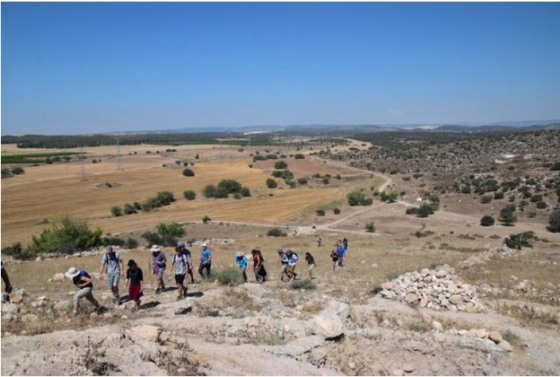 Of particular interest is the photo below. Note the modern city in the middle background. There is a prominent hill on the right with broken trees on top, and a rise on the left (trees, dirt, and trees).  This is the historic site of the battle of David and Goliath. The Philistines were camped on the right, Israel on the left. David and Goliath met in the space in between in a classic late-Mycenaean champion’s duel (see the Iliad).  A small river runs from Gath down this valley and beyond, and it is from here that David selected the 5 stones to combat Goliath (who had 4 large brothers).

After Goliath fell and was decapitated, the very super superstitious Philistines (as were most ancient people) fled up this valley away from the more powerful Hebrew God whose boys can slay their fiercest war champions) towards where the picture is taken and to relative safety at Gath. This is the biblical valley of Elah. So in 1000 BC you can imagine Philistines routing up this valley directly towards you. 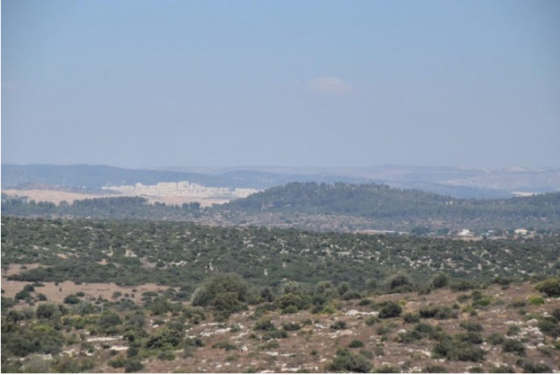 Below: Tell-top excavations from previous years. We are now digging in the lower city where we will find more domestic material (less elite or cultic ritual stuff). We are also actively searching for the gate of Gath. I’m sure we are close. 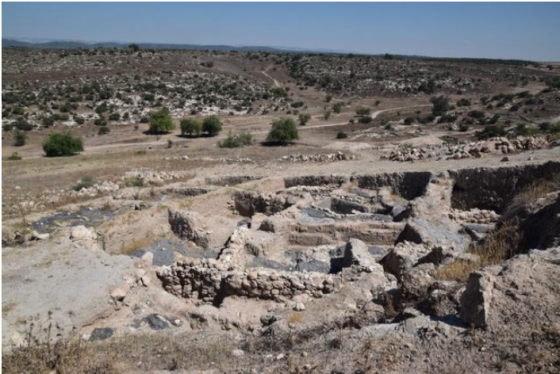 Here are some other perspectives of the Elah valley from the other direction. I am excavating a few metres from ‘David’s brook’ and frequently take shade breaks in the brook which is bone dry this time of year and completely brown. The image at left was taken in winter. David selected his 5 stones from here, thus the gloved 5 fingers. 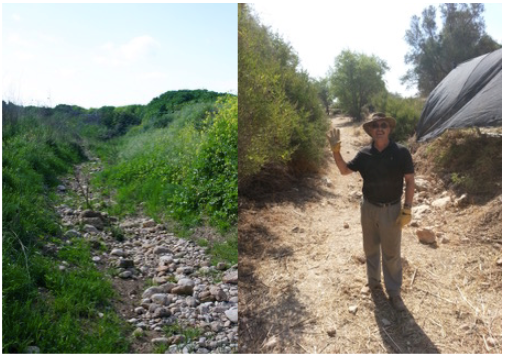 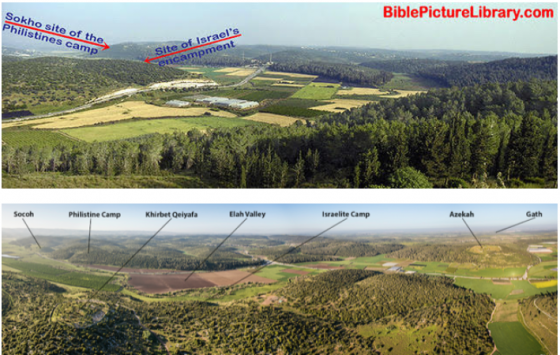 We walked to the top of the Tell from the north side. It has sweeping 360° views and we stand on human occupation levels that span at least 4000 years. There is history and scattered pottery sherds everywhere.

The Ps were eventually subsumed into local culture as Canaanites (ca. 830-586 BC) and were carried away by Nebuchadnezzar of Babylon. This is when Daniel of the ‘Lions Den’ story was taken as well. They disappear as a culture while the Jews, suffering the identical fate, and repeated pogroms, maintained their culture until the present day, even restoring their nationhood and land (in 1948). But that is another story entirely.

No excavation on Day 1. Next post: Days 2-5 at Gath and some remarkable finds.