Gath is too big to cover in all in these posts – there is a published series of volumes of the Gath excavations so far since 1996– so for the purposes of this series of 2018 field work, I’ll focus on my working square 82D of “D2” with Dr John DeLancey of Pennsylvania, as a representative template, as well as some later surveys of Area M.  But for now, we are inside what we think is the water gate of Gath.  We’re digging down in Square 82D of Area D2.

Below: Dr John Delancey of Pennsylvania and John Stringer MA (PhD candidate), the only Kiwi on the excavation. John from NZ and Dr John from Pennsylvania, two Johns in a square, ie ‘JohnSquared’ (John2). John and I were, coincidentally both pastors (in different countries) for many years. Dr John conducts fascinating biblical tours, and if you’d like to go on one, see his fascinating website here which is packed with maps, photos and videos: http://biblicalisraeltours.com.  John and I, both in our 50s, were real mules on site and moved a lot of soil quickly and efficiently. Better than any subscription to a gym.

This 82D square focus over the next few posts will give you a guided tour of our excavation and how a typical archaeological dig works from the reference point of a single square among dozens of active squares. 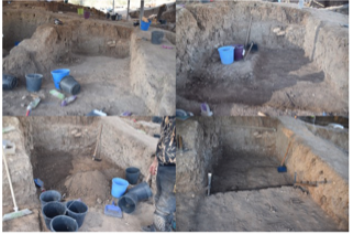 Dig Day 1 in 82D.
This is largely how we find 82D after the 2017 excavations, cleaned and cleared. There is a small 2017 excavation trough along the base of the back wall. The strings and coloured balls are not yet secured to the bulks. 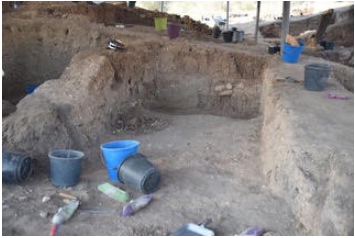 Below: the two ‘Pastors–John’ have removed about 20cm of floor from ‘John2,’ the right hand half of the square and 2018 season 21 is underway! 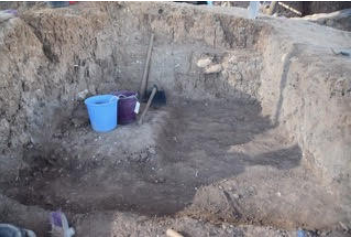 Inside this first layer (which levels the old 2017 trough at the back with a new working floor level), I make my first ever major archaeological discovery!  It’s a large late Bronze Age yellow Canaanite jug handle, painted on the handle (which is significant) and on the jug itself with an ochre paint. It is crudely made but in a sophisticated style. This is significant as it is pre-Philistine (up to ca. 1200BC), which means it is either a kept heirloom, or from an older tip-site used by the Philistines to fill in this area of the gate (more of which later). There are no other pieces, so it is obviously fill (rubbish) tossed in to this location (again, significant). This item is eventually bagged as a “special item” and given its own number for more study and photography later by Jeff and Aren.  Its layer is carefully noted as it helps with dating.  It is unusual, both in makeup and its found location.  A great piece of first archaeology. 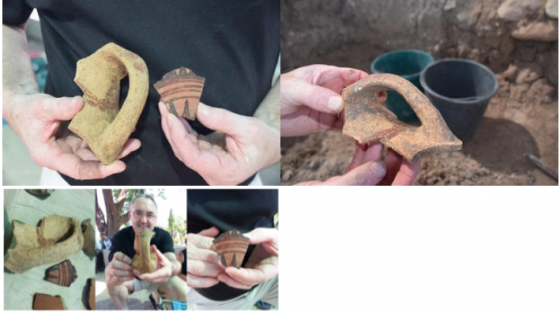 Later, in the same floor layer close to the much earlier Bronze-Age Canaanite jug piece, I uncover this nice piece of quintessential Iron Age 1 Philistine bichrome ware with its distinctive black/red painting swirls. This piece is much later (ca. post-1200BC, perhaps 1150s?). These are quite Minoan in my view, rather than the more rectilinear painting subject’s of late Bronze Age Mycenaean art of The Iliad/Odyssey folks: Achilles, Ajax, Odysseus [aka Ulysses], Nestor, Agamemnon etc. 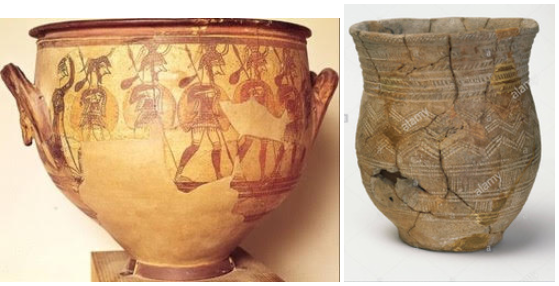 See of the others working nearby to John and I in 82D are: Ahuva from Tel Aviv (right) who has been at Gath almost every season since 1996; and Erika from Germany.  They are excavating across the bulk from us and uncovering what we think is an ascending staircase leading up from our square, up the hill though the gate area to the east and then south into the lower city in front of the Tell.  They may have uncovered evidence of the Bronze/Iron Age ground level pathway.

Below: an exhausted Erika (left) and Ahuva (right) taking a break in square 82C; and below them, the 82 C-D square supervisor Eitan Meer at his “office desk” within the left pigeonhole of the ‘E’ structure directly opposite us.  Eitan is an ex Isreali soldier and a Classics scholar like me; his interests are Roman and Hellenistic archaeology but I’m trying to persuade him to the Bronze-Iron Age transition.  I’m like Professor Aren. Anything pre or post Bronze Age/Iron Age is…meh.

And below this is site supervisor Dr Jeff Chadwick (right) of the USA and Israel, with Eitan sitting on the uncovered stairway uncovered by Erika and Ahuva in 82C with 82D in front of them. The higher square behind them is Aussie Alice’s square (she is immediately behind Jeff) and is being worked by a group including several from Australia. It is expected the 82C stairway will extend up inside their square, so they have some downward digging to do. We have already determined this is a triple step. Flat path then step 1-2-3, flat path, then (perhaps) step 1-2-3 again, ascending up the hill before turning right upward into the lower city. 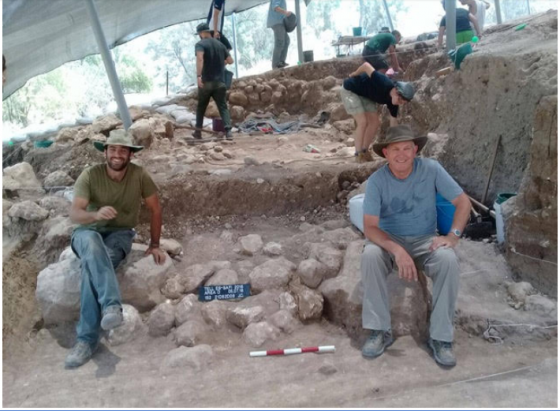 Next Post: Tools of our Trade; More People; and More Finds.