There’s been a few claims and counterclaims about violent offending by young people so I thought I would check the data out.  First of all we have the the publication by the Ministry of Justice called Youth Justice Statistics 1992 to 2006.  Sounds authoritative.

It deals mainly with 14 to 16 year olds.  Why? Because at 17 you are deemed an adult to be tried in an adult court, and below 14 you can’t be charged except for extremely serious crimes such as murder. On page 35 we get the population figures for 14 to 16 year olds.

But back to youth violent crime apprehensions. The graph below shows the trend nicely: 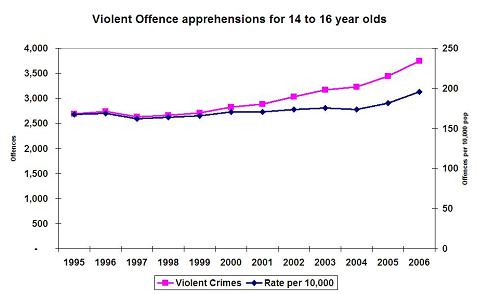 Now this doesn’t mean it is literally the fault of Government.  Helen Clark isn’t going around leading teenage gangs on a rampage.  But what it does show is the youth violent crime level was steady, and has increased in the last few years, and that this is why new policies and new approaches are a desirable thing.