The monthly polling newsletter will be out over the weekend. You can subscribe to the full newsletter here. 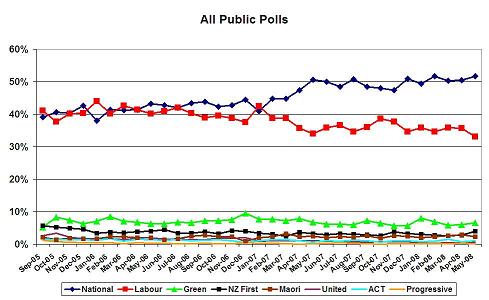 There were seven public polls in May 2008, and the average of them shows a distinct trend. Labour have dropped almost 3%, with National, NZ First and the Greens all making gains. 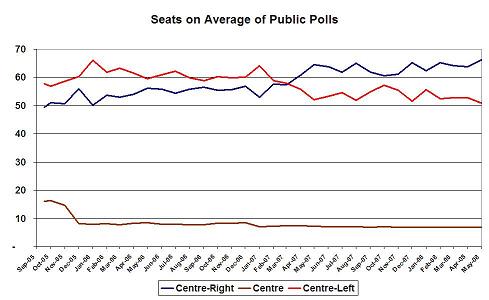 Of course it is not just a National vs Labour race, but the projected seats per bloc also show a trend. The CL bloc actually led until March 2007.

Another interesting graph is this one done by Therese Arseneau, a political science fellow at Canterbury University, using the One News Colmar Brunton results:

Therese has gone back to 2002, which was a low point for National. The graph does show a very clear trend over the last six years, when you iron out the monthly highs and lows. She comments:

These trends have been amazingly consistent and strong, particularly for National. Don Brash’s Orewa speech did seem to alter them for a time, sparking a boost for National (and dip for Labour) in early 2004.  This disruption was not sustained and within months of the speech, support for both National and Labour had reverted back to their steady procession along the trend lines.

The trend has also been consistent through three successive National leaders. There was a spike after John Key replaced Don Brash as leader but again, the growth in National support settled back to the trend line.

This suggests that neither event on its own was decisive to National’s renaissance. Instead, for six years now National has been heading towards victory and Labour towards defeat.

Long-term trends are the hardest ones to turn around. A massive rise in the polls can just as quickly reverse. The slow steady rise or fall is far more desirable or undesirable depending on which you are facing.