Has been a busy few days. In the last week or so I have:

Agenda went well I thought. Danyl made an interesting comment:

There was a weird bolsheviks v mensheviks vibe to the Rodney Hide appearance on Agenda this morning. The two ‘commentators’ were National activist David Farrar and media village idiot Deborah Hill-Cone, both of whom are sympathetic to ACT ideology (if not the party itself). They grilled Hide aggressively over his failure to grow the party – much more so than any independent or left-wing analysts would have done.

When I am in roles like this, I think I probably do push harder those I am more naturally in agreement with. I remember also pushing Gerry Brownlee when he appeared quite hard on the Brian Connell issue.

And the fix appears to be in in regards to the Agenda book club, with the book on Jim Bolger being won by former Bolger staffer and Agenda commentator David Farrar! Highly suspicious!

Heh the prize was for knowing the nickname of the Air Force plane Bolger used to fly on – Spud One of course!

The seminar yesterday at Vic (Pipitea) was fascinating – both in terms of content and the technology involved. We were luckly to have the Government’s overall CIO speaking and the proposed online identity verification service sounds just nifty.

The seminar was connected by access grid to four other sites. Vic’s Kelburn campus and also Otago, Canteerbury and Auckland Universities. 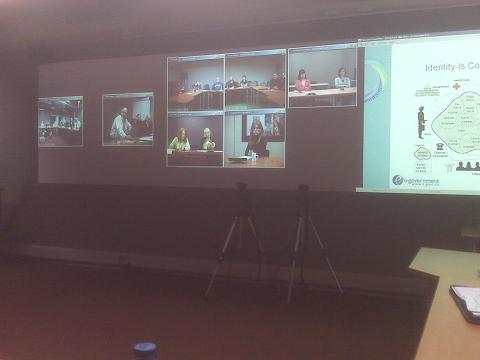 This is it in action. The video linkup was excellent and good quality. Sadly the audio failed for us and all the other campuses could hear us (which was okay as the speakers were in Wellington) but we could not hear them. We coped with a mixture of sign language and e-mails.

My contribution was on the benefits, risk and issues around the combining of identity with location (GPS) services. I am hugely keen on the benefits but there are some potentially nasty aspects which will post challenges.